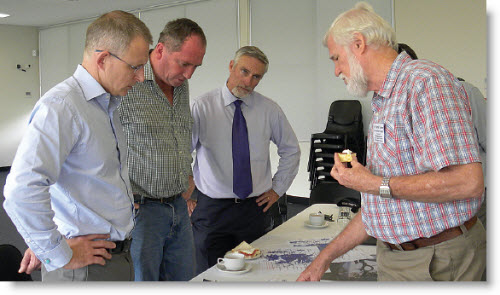 “We are here to pitch and lobby, Mr. Fletcher cannot make concrete promises, it doesn’t work like that,” Mr. Joyce said in his introduction.

Copeton Dam is very much on Mr. Joyce’s and the Inverell Council’s radar as an essential area to receive some of the $100 million set aside by the Federal government to spend on mobile phone coverage in regional and remote Australia.

The government is currently seeking input from communities around Australia for locations that need and do not have coverage.

Mr. Fletcher said the criteria covered areas prone to natural disaster, small communities, major transport routes, and areas of major seasonal operation.
“It is useful for me to understand priorities”, he said.

Copeton Dam attracts a large number of visitors, particularly over Christmas and Easter. Park Manager, David Allan sees the lack of phone coverage as a deterrent to visitors, and is a significant safety risk.

Inverell Councillor provided maps and explained to Mr. Joyce and Mr. Fletcher the most effective position for a phone tower would be Fig Tree Hill, between the dam and the Inverell to Bundarra Road. The estimated cost of the tower is $300,000.

Cr. Paul Harmen said that during the Christmas period, there were 10,000 people in the park.  “If there is an accident, be it a car, boating or other accident, you have to get to the office to make a call using a landline,” Cr. Harmen said.

The Inverell council indicated it would be willing to contribute $20,000 in cash and in-kind services to see the project come to fruition.

The Copeton Dam Recreation Park is situated on the edge of the Gwydir Shire, Fig Tree Hill, the favoured spot for the phone tower, is in Guyra Shire, and the Copeton Dam receives heavy visitation from Inverell people due to its proximity to the town.