Two folders containing photographs and burial records of soldiers from Bingara and other northern towns, were presented to the RSL Sub Branch last Thursday evening. 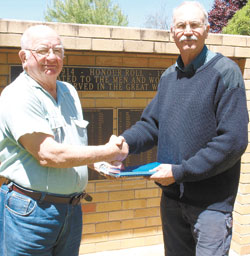 The folders were presented to the RSL Sub Branch President, David Young by historian Trevor Withers, on behalf of Mrs. Sue Young, who compiled them (pictured left).

Mrs. Young travelled to Northern France and Belgium in May, and toured the villages, battlefields, cemeteries and memorials relating to World War I.

“I was walking in the footsteps of my grandfather, Ernest Charters, born at ‘Hilltop’, Bingara,” Mrs. Young wrote to the RSL Sub Branch.

“Ernie was lucky he returned to Australia, his brother Bute Charters did not.
“He was killed in action during the cavalry charge at Beersheba, Palestine,” Mrs. Young wrote.

“While visiting Bingara earlier this year, I photographed the engraved names on the RSL War Memorial Wall of the diggers who fought in the first World War.

“Many of the young men from Northern NSW did not return to Australia and it must have been very sad and emotional time for towns like Bingara and all over Australia when so many of their sons, brothers, husbands died so far away from home.

“On my journey to the WWI battlefields, I managed to find and photograph most of the cemeteries and headstones of these young men who never made it home,” she said.

Sue compiled two folders containing the names and personal particulars for each man as well as a photograph of their headstone, and the cemetery.

In some cases there was no headstone, so Sue included a photograph of the appropriate memorial where names, in most cases, had been engraved.

“Unfortunately, due to distance, I did not manage to make it to five of the cemeteries, in which case I have included a photo of the cemetery from the internet with thanks to the AWM,” Sue said.

Sue has donated the folders to the Bingara RSL Club for people who may wish to read about relatives, or those interested in Bingara’s history.

“Many of the names are probably still familiar in Bingara today.”

Sue asked family friend Trevor Withers to present the folders to the RSL Sub Branch on her behalf.

“This beautifully presented information is indeed a greatly appreciated gift,  recorded for posterity,” he said.