With pink tablecloths and pink and white flowers in abundance, the entire footpath in front of the hotel was taken up with tables set ready for breakfast.  The first customers to arrive did so at 7.00am, and it was not until after 10 am that staff and volunteers could ‘draw breath’.

Hospital staff have been ‘pink’ for the month of October, raising awareness for breast cancer. All the staff, including the men, wore pink shirts during the month.  Also resplendent in pink were staff at the Bingara Medical Centre.

During October, Hospital staff made morning teas which were sold to staff. They also conducted a raffle the proceeds of which went to the local Community Comfort Group.

“We raised $372.60 for Community Comfort,” Fundraising committee spokesperson, Tiffany Galvin, said.  This is the fifth year, the Fundraising group have held the Pink Breakfast, and including this year’s profits, over $15,000 has been raised. 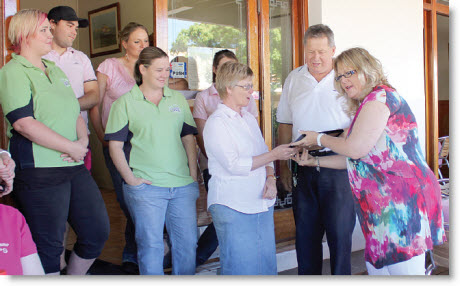 Shaen Fraser, Regional Programs Co-ordinator and Jane Sweeney, Community Relations coordinator from NSW Cancer Council, Tamworth, came and joined in the Breakfast, presenting Certificate sof Appreciation to Noelene and Erik Ozols and their staff and also to Bingara Community Health and Hospital staff for all their hard work over the last five years.  “This is the biggest breakfast event in the whole area,” Ms. Fraser said.

Tiffany Galvin told the Advocate the group of volunteers from the hospital, staff at the Imperial and other volunteers served 175 breakfasts, raising $2,300, plus $650 in raffles and merchandise, bringing in a total of over $15,000 for five years.“This is a mammoth effort, considering everyone donates their time,” Tiffany said.

“We extend special thanks to all the local businesses who donated towards our breakfast each year, and the girls who act as waitresses, along with waiter, Nic Hutton.

“Each year the breakfast seems to run more smoothly, and this year was no exception, we think starting at 7am.” Tiffany said.  Other volunteers included a number of local gardeners who supplied cut flowers to decorate the tables.  Noelene Ozols added her thanks to all the customers who supported the event by buying breakfast.

The hospital was also decked out with pink lights during October, and staff reported that many residents made the trip to the hospital to see them.

The Advocate understands that next year, the Fundraising Committee will hold a similar breakfast, the proceeds going to Prostate cancer research.