A massive $3929.05 was raised in the span of two hours last Friday, November 4 at the Pink Ribbon Breakfast. Nurses and the staff of the Imperial Hotel volunteered their time to run the event which saw approximately 180 breakfasts served in two hours. 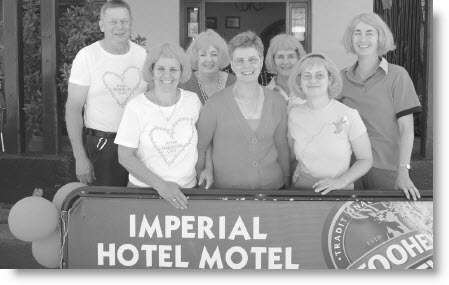 “A lot of organization goes into preparing this big breakfast and nothing ever seems to be a problem with them. “This year their staff generously donated their time for this fundraising event and we would really like to thank them for this,” she said.

Tiffany went on to thank other Bingara businesses who generously donated ingredients for the breakfast including Meat on Maitland, Bingara IGA and Hardware and Bingara Bakehouse.

Individuals helping with the preparation of the event included Rebecca Mack who designed the menus and posters, Terry Pankhurst who supplied homegrown spinach and Pam Holland who made the Pink Aprons. The Gwydir Shire Council was also thanked for their printing.

Shaen Fraser, The Regional Programs and Operations Co-ordinator at the Tamworth Cancer Council attended the breakfast.  “I am so amazed every year at how a small community can put on such an event,” said Shaen.

Shaen was selling merchandise on the day as well as supplying people with educational flyerswith information on breast cancer and cancer support. “A big thank you goes to the Bingara Central School staff and students for the money they raised for having a ‘mufty’ day,” said Tiffany. Helping out on the day were nursing staff, Physio Susie Bilsborough and Health Service Manager, Sue Mack from the Bingara MPS as well as other individuals volunteering their time.

“We were very grateful to have John and Chris Whitfield and Charlotte Gibson helping. John was used as the delivery man who made sure people could still have breaky at other places in town.”

Approximately 180 meals prepared in the span of two hours was an amazing effort for all involved and the organizers appreciated the patience of all who were dining on the day. “We are sorry if there was a delay in some cases but it was a mammoth effort making 180 meals in such a short time,” said Tiffany.

The whole event was all voluntary and those involved should be pleased with the overall success of the morning.