Podium finish for local rower at AAGPS Head of the River

In only his first year of schoolboy rowing, Sam Cannington had a great end to the season with a podium finish in the First Fours event over 2000m at the 120th Athletic Association of Great Public Schools (AAGPS) Head of the River regatta at the Sydney International Regatta Centre on Saturday 18 March.

Rowing in the stroke seat for The Armidale School, Sam, of ‘Glenall’ Killarney Gap Road, and former Bingara Central School student, stormed home with his crew to cross the line in 6:55.72 – achieving their primary goal of the first sub-seven minute time recorded by a TAS crew at the regatta. 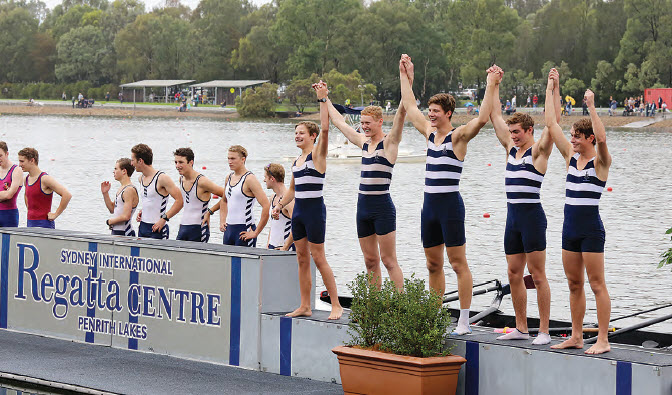 Sam Cannington with teammates Henry Hughes, Sebastian Scott, Michael Baldock and Saxon Hughes after the The Armidale School’s podium finish at the AAGPS Head of the River Regatta in Sydney. Photo: Tim Scott.

The crew spent most of the race neck and neck with St Joseph’s College and St Ignatius College Riverview, with less than a second ultimately separating the three crews. TAS was second at the 500m mark behind ultimate winner Shore School, then narrowly dipped to fourth at the 1500m before crossing the line in a photo finish with Riverview for third.

“We tried to get out of the blocks as fast as we could to get us in a good position for the first five hundred metres, then maintained the strength for the next five hundred,” Sam said.

“With seven hundred and fifty to go we started hearing the drums and bagpipes of all the schools cheering and that incredible atmosphere carried us along as we just gunned it for the final two hundred and fifty metres.”

Sam said that when the crew crossed the line they felt they were in with a chance at a podium place, but their main goal had been to finish in under seven minutes.

“No other TAS crew had done that, so we pumped just to do that, and then when we were told we were in third place after a photo finish, we were just so excited.”

Sam only started rowing in October. “It was something new and last year I had seen the boys doing their ergs and how everyone was such a tight knit group, and that really made me want to do it. It’s a great sport and has been a fantastic experience,” he said.

TAS fielded three Fours in this year’s event, which was held on the course especially built for the Sydney Olympics.