BingaraLatest NewsSportsPolocrossers take over showground for a successful championship weekend

Polocrossers take over showground for a successful championship weekend

Horse floats, trucks, goosenecks galore were packed in like sardines at the Bingara showground over the weekend for the 2015 National Polocrosse Championships.

With 86 teams competing for a chance at taking out the championship it was the South East Queensland team of Tansey who took home the overall bragging rights.

With over 500 competitors, along with their horses and family members, the population of Bingara almost doubled for the weekend turning the showground into a mini city. A team even flew over from Western Australian borrowing NSW horses to compete over the four day event. 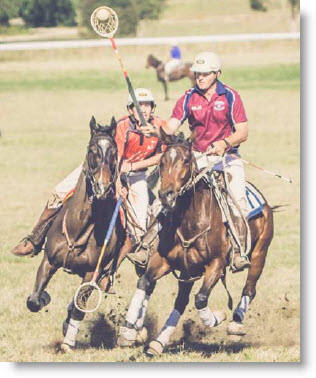 Hosting the event was the Bingara Polocrosse Committee made up of only six adult members – making for a massive effort to successfully run the weekend.

From the canteen to the scoring board, and on the field as well, it was thanks to the support of family, friends and other volunteers that kept the ball running, making for a well-received event.

“It was a very successful weekend with everyone seeming to enjoy themselves,” said secretary of the Bingara Polocrosse, Simone Duff.

“While we only have a small committee every one put in a massive effort and with the help of friends and family we were able to successfully host the four day event.”

“We would especially like to thank the Gwydir Shire Council for all their assistance in the huge job of maintaining the grounds in the lead up to the event. The grounds were in immaculate condition.”

There was a great number of local teams competing over the weekend including the Bingara team consisting of Simone Duff, Melissa Hansen, Jason Creed, Glen, Anna and Cameron Hull. Unfortunately Bingara was taken out in their Semi final however a local team from Inverell were successful in taking home the A Grade Women’s section.

Many comments coming from those visiting Bingara over the weekend reflected a little town with a big heart with one person commenting “Bingara is such a nice little town, all the people are just so friendly and helpful.”