Two people with life-time involvement with the Bingara Pony Club have been awarded life membership of the club.  Brenda Pankhurst and Scott Brown were presented with their Life membership badges at the conclusion of Pony Camp.

Brenda Pankhurst has had a long involvement with Pony Camp as a rider, a parent and grandparent.  She started in C troop in 1956, and although she did not attend Pony Camp for many years as a child, always loved being involved with the club.  Brenda’s behind the scenes involvement involved working in the kitchen, cooking and cleaning up.

She and her husband Peter, were made Patrons of the Bingara Pony club in 2002 in recognition of their work for the Club. 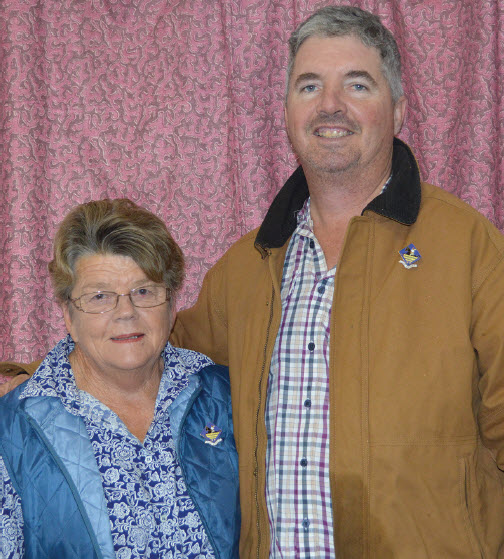 Two of their four children, Philip and Catherine attended Pony Camp, and most of the Pankhursts’ grandchildren are very keen participants.

This year, only two grandchildren attended Pony Camp, but Brenda has, along with their parents, been taking care of as many as eight grandchildren during Pony camp week.

“I have always loved the Pony Club”, Brenda said.  “I enjoy the people, the atmosphere, I have always been interested because I like horses.”

Brenda still keeps the felt ribbons she won at Pony Camp more than 50 years ago.

Even on Sunday, between Pony Camp and the Zone 8 Jamboree, this year hosted by Bingara, Brenda was busy cooking biscuits for the coming week of events.

Scott Brown started attending Bingara Pony Camp in 1971, when he was a small child.  His father, Les, had been heavily involved in the club since its inception, and his two older brothers attended Pony Camp as they were growing up, so for Scott, it was natural that he too would follow.

He competed at Zone level until he was about 21, then spent a few years working away from Delungra before returning as a parent.  His daughter, Lexi, started at Bingara Pony Camp at three years of age. Now aged 19, Lexi rides as an associate and is an instructor, and her younger sister, Felicity, is in Bingara’s Jamboree team this year.

When he returned, Scott says “they penned me up, and I took on Chief Instructor for four years before, and this time all but 17 years.”

He said he is currently Chief Instructor “for the last time,” but time will tell.  Although he is a Delungra boy, Scott’s heart is with Bingara Pony club.  “It’s a great club, great town, a great bunch of people, so I keep coming back,” he said.  “It feels like home.”

Les Brown, who only passed away a few years ago, was also a life member of Bingara Pony Club.

Scott described his life membership as a great privilege, that he feels he is too young to receive.  “Pony club is a great organisation, no matter what you do in life, it is a good grounding, and it is not just about riding. It teaches you responsibility, getting on with others, and giving things a red hot go”.