He has kept his heavy Scottish accent, but now Norman Lawrie is a true Australian, and has a certificate to prove it.  In front of about 200 people attending the Australia Day celebrations at the Museum, Norm proudly took the oath and made the proclamation necessary to formalise his citizenship. 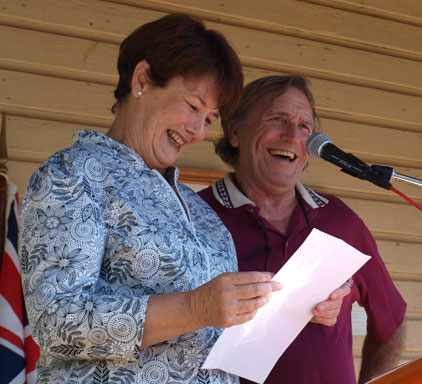 Norm came to Australia from Scotland in 1970. He was 26 years old.  Under the Assisted Passage program he paid £10 ($20), and agreed to live in Australia for at least two years.

Norm thought he was an Australian citizen, and only recently learnt that he had to go through the formal process of citizenship.  Assisted passage migrants who arrived before 1967 were automatically made citizens, but because he arrived three years after the cut off date, Norm missed out.

In a prelude to receiving Norm’s Oath of Allegiance, Deputy Mayor, Catherine Egan said he was drawn to Australia with its fantastic weather and sunshine.  “He says that he has now developed an affection for our beer,” Cr. Egan said.

“When Norm first moved to Australia, he lived in Sydney,” Cr. Egan said.  “He developed an affinity with our area after visiting friends. Norm’s mother, Nancy, also came out from Scotland and her many visits to our local area led her to make Bingara her home.  “Some time ago, Norm’s mother fell ill, and Norm nursed her for over two years. After her death, Norm decided to stay on and has lived in Finch Street for over 12 years,” Cr. Egan said.

“I need a Tooheys New,” Norm quipped after he took the Oath of Allegiance.