Races without horses still a success at Bingara

A damp track couldn’t dampen spirits as the 2020 Bingara Races went ahead last Saturday despite the races themselves being cancelled.

Live feeds from around the country let punters have a flutter, while the grounds and grandstand allowed guests to mingle and enjoy the Fashions On The Field.

It was only a short, clay-heavy section of track several horse-widths across at the 400-300m stretch that caused the races to be cancelled according to Bingara Jockey Club President Daryl Burling.
“The NSW Racing Steward came up from Tamworth and deemed the track unsafe at lunch on Friday,” Burling said, adding that safety was a priority for the event.

Following the death of Tamworth jockey Darren Jones at Warialda in 2017, the safety of jockey and horses was paramount.

“It was still a very good day. We went ahead with a phantom meeting, we still had all the Fashions, and still had the marquee.  “And I’d like to thank the Gwydir Shire Council for all the work on the grounds – the slashing, mowing, spray, and tree trimming they did,” Daryl added.  “It made the Committee’s job a lot easier, and we had some really good Club members in Peter Houlihan, Angus Grant, Sinclair Munro, and Damien Crump.”

Daryl went on to say that it was a good turnout, with no entry fee save for the Bingara Support Group of the Westpac Rescue Helicopter Service taking gold coin donations at the gate.

Jockey Club Secretary Vanessa Richardson, and Marquee organiser Tiff Galvin both praised the work of Daryl, saying he put so much effort into the event.

A marquee organised by the Tiff and Damien Galvin, Karen and John Bishton, Joe Munro, and Krissy Grant held food by Swan Fine Food, with entertainment by former local Natalie Baker.
“It was a good day – everyone enjoyed it,” Tiff Galvin said.  “Even though there were no horses, it was still extremely beneficial – it was lovely to have a local girl, Natalie Baker, back to do the entertainment, and we hope Swan Fine Foods are back again to cater next year.”

The marquee drew in 100 guests, according to Karen Bishton.

Tiff added that even though times were tough she was very thankful to those sponsoring the fashions – there was no hesitation in them coming forward.

Without horses, it was decided that it would be a shame to waste such a beautiful track and so a series of human races were held instead, with fascinators flying, and several falls, though luckily the vet did not need to be called. 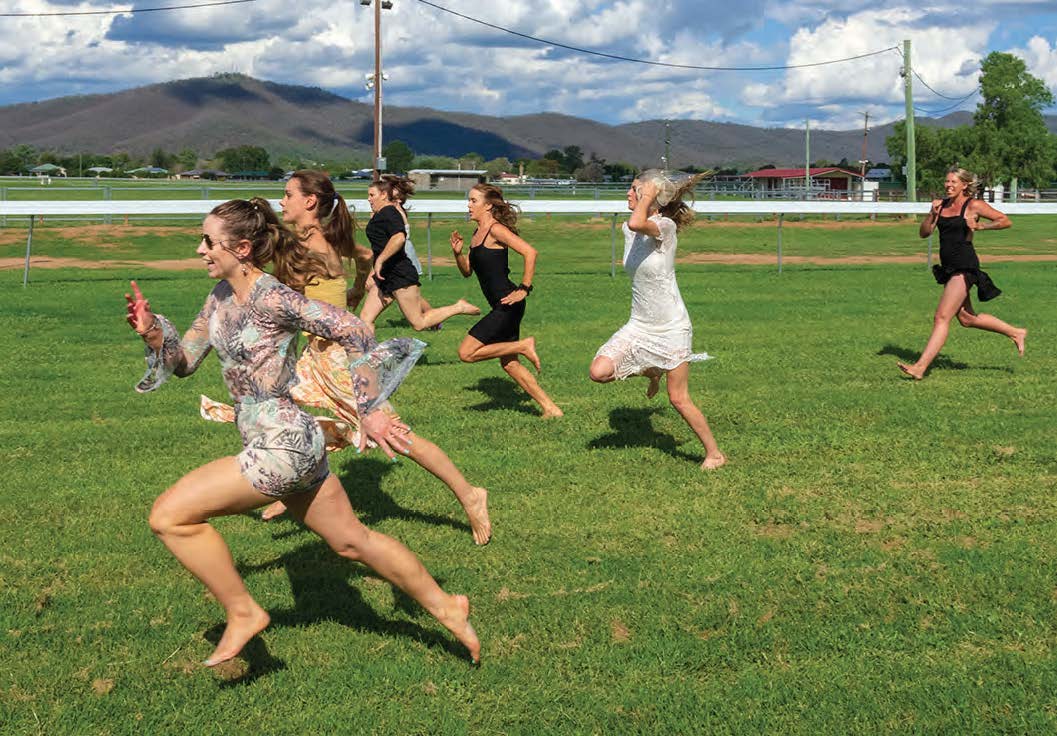 A lack of horses didn’t stop the Bingara Races on Saturday, with a series of impromptu human sprints held on a drier (and much shorter) part of the track on such a beautiful day.