Wet weather didn’t deter the keen pony clubbers from finishing up an eventful week of Pony Camp. Flash flooding left them stranded in their dorms during the morning but as the rain settled to just a light shower they hopped back on their horses for an afternoon of muddy riding.

Campers were to treated to 360° waterfronts as they exited their accommodation.  Good for ducks, not so good for leather boots!

Friday saw the One Day Event and Dressage Competition along with the  campdraft  go ahead with Jacqueline Coombes being the overall winner of the  Johnson Family ODE trophy.

Jack Brown (a grandson of Peter and Brenda Pankhurst who had 8 grandchildren at camp) was the winner of the Les Brown ODE Mini Course trophy.

Colless Coombes was the eventual winner of the Campdraft Trophy.

With Storm clouds looming on Saturday morning it was a rush to get the Gymkhana day over and done with. In between showers and ominous looking storms all of the events were finally completed.

Whilst the dressage competition was being held  for the older children,  F Troop rode their  mini course with both the Led and Unled groups getting the opportunity to compete. “The kids really enjoyed this but I imagine there would have been some tired parents,” president Rob Coombes said. 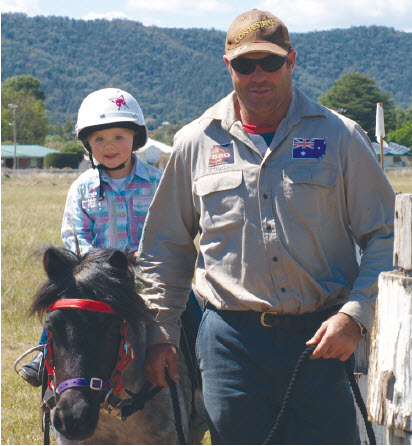 One of the youngest Pony club members, Addison Dixon was led by
her dad Stuart Dixon around the mini cross country course.

The Presentation saw certificates presented to 27 F Troopers along with a ribbon for participating in their very first cross country course.

The Max Burnley Shield for Grand Champion Rider was won by Tom Smart and was presented by Vern Withers, Tom’s grandfather. It was great to see Tom keeping up the family tradition. Tom’s mum Julie was the third winner of the shield.

The Alex Dufty Memorial Trophy for most successful Sporting Horse was won by Joanne McGowan.

The Jaqui O’Neile Trophy – Highest points over 7 events was won by Stacey Duff.

The Austin Legg Citizenship Trophy was won by Lara King.

Rob Coombes thanked everyone for a wonderful week. “In particular a huge thank you to the instructors, camp mums and commandant and to Mashy and her helpers for once again outdoing themselves in the kitchen, the food as always  was amazing.” 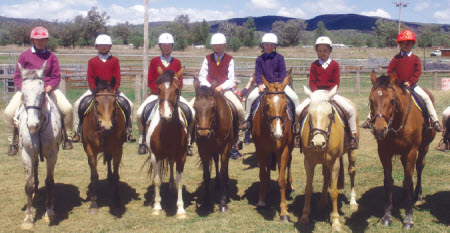 Robert offered his sincere condolences to the Brown Family at this very sad time.  Les will be sadly missed by all who had the pleasure to know him.