Rain takes tennis to the table

Organisers and players celebrated the 75th anniversary of the Bingara Open Tournament largely indoors, thanks to rain. Ken Wray Tennis NSW regional Development Office and his entourage had the kids on the courts on Friday afternoon.

At the completion of their session the 15 or so local children were given medals and T- Shirts, not bad for turning up and being coached by some of the best in NSW. On Saturday play began, with  64 players who came from Brisbane, Taree, Sydney, Canberra, Central Coast, Moree, Inverell and surrounding towns to play tennis in front of a good crowd.  Everyone played a number of games and a few events got through to the finals.

Unfortunately rain fell on Saturday night and washed out the tennis for the rest of the weekend.  However a couple of the finals were played out on the table tennis table on Sunday afternoon. 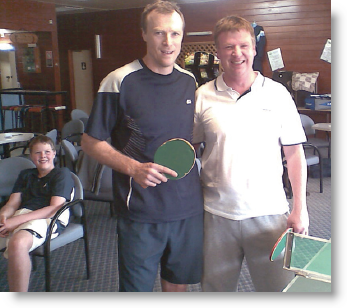 Open Winner Pat Staunton from Sydney and runner up Jason Birch from Inverell. The Open Final was played on the table tennis table.

Even though this might not be the ideal conclusion to a tournament no one minded and an afternoon of fun and good sportsmanship was had.

The organisers of the event would like to thank the very generous sponsors, Hopwood Miller Communication and design, and Jo from Hopwood Miller for the design and printing of the posters and entry forms (at her own expense) every year, Gwydir Shire Council for the printing of certificates and extra wheelie bins for the weekend and anything else that was asked for and The Bingara Advocate for their support.  Also, this year, a big thank you to Bingara Lions Club for their support with catering and Steve Adams and Tony Miller for their weeks of court preparation to get the courts match ready.  The courts had never looked better.  A thank you also goes to Gay and Don Mack for their years of support for this tournament.

The Sunday night Chinese Buffet and entertainment by ‘Two O.c’s’ was firstclass. Many thanks to the club for putting on the entertainment.

The auction of tennis gear, donated by Ken Wray, from the recent NSW Tennis
Open and also the Australian Open tennis balls signed by Kim Clisters and Wilfred Tsonga was a bit hit.

The winners of the Queens Birthday Raffle are as follows:

Prizes can be collected from the Sporting Club during their opening hours.

The 200 club winners were Mick Walton, Bob, Seale, Melissa Hampson, Peter Ireland, Peter Best and Matt Seale.  However it is the mateship, friends, a tradition dating back 75 years in Bingara and most importantly in NSW Tennis history that makes it all worthwhile.