The achievements of a number of groups and individuals across the Border Rivers-Gwydir catchment were celebrated by a crowd of 150 people in Guyra last Wednesday night.

The Regional Landcare & Catchment Management Awards were announced at the Landcare Adventure dinner with Northern Tablelands MP Richard Torbay presenting the trophies. In his address Mr Torbay acknowledged the work that Landcare does across the region in bringing the community together as well as improving agricultural sustainability and natural resource management.

Awards were presented across nine different categories recognising the diversity of work that is done in Landcare and catchment management. Chair of New England North West Landcare and previous NSW Individual Landcare Award winner, Jude Cox, was part of the judging panel and told the crowd about the quality of the nominations that were put forward for the Awards.

Winner of the Autry Dennison Memorial Indigenous Award was Banbai Business Enterprise Inc based in Guyra, awarded for their work to increase indigenous participation in natural resource management and their management of Indigenous Protected Areas to the east and west of Guyra.

Runner Up in the School Education Award was the Glen Innes Schools Eco Program, a partnership between the four schools in the town. A special Judges Award for this category was presented to the amazing work that the small Boomi Public School have done in environmental education.

Macintyre High School took out the hotly contested School Education Award, which had the greatest number of nominations, and the trophy was accepted by Head Science teacher, Deborah Snaith, who has spearheaded much of the school’s environmental work.

Innovation in Sustainable Farm Practices was recognised with the runner up prize awarded to Jim and Yvonne Benton from Glen Innes for their on farm research into practical, effective control techniques for invasive perennial grass weeds such as African Lovegrass and Coolatai Grass. The Engineered Woodlands Project nominated by Southern New England Landcare demonstrated the greatest innovation with its establishment of native trees within grazing enterprises, providing benefits in shade and shelter as well as timber products in the longer term.

Urban Landcare is alive and well in Tenterfield with both the winner and runner up for this category. Tenterfield Community Garden came a close second to the Tenterfield Naturalists Group. The Naturalists Group have achieved an incredible amount in the rehabilitation of a woodland area just on the edge of the town, creating a real natural asset for the community.

Partnerships between Landcare and local government were recognised with the runner up being presented to Gwydir Shire Council for their work with Upper Gwydir Landcare Association and activities such as Carp Musters, Rivercare work in Warialda and Bingara. 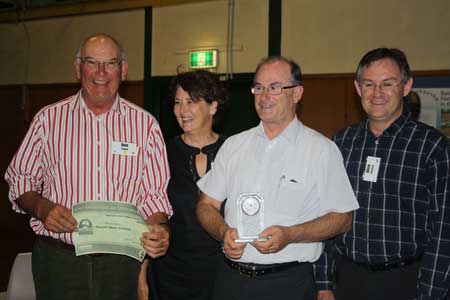 Winner of the Local Government and Landcare Partnership Award was Uralla Shire Council for its work on a diversity of projects including the Uralla Sub-Catchment Plan, work with the High Country Urban Biodiversity program and communication initiatives such as the Living Sustainably Uralla Shire newsletter.

The Community Group Award category attracted numerous nominations and Tenterfield Naturalists were again recognised for their great work as runner up. Balala Brushgrove Landcare Group from west of Armidale won this category with their long history of amazing projects covering everything from pin rush control to grazing management.

The Landcare Primary Producer category recognises those farmers who have implemented farming and grazing systems to improve soil health, groundcover, profitability and sustainability. Runner up was Ron Caccianiga from Gravesend who has included farm forestry, grass seed production, solar energy and innovative crop rotations in his farming system. The winners David and Alex Mason from “Weegowrie” Inverell who have implemented innovative resource management as a means for maintaining a commercial scale farming system which is productive and resilient.

While young farmers appear to be few and far between the Young Landcare Leader Award was presented to an outstanding nomination of Duncan Davidson from Bannockburn north of Inverell. Duncan is a believer in continuous improvement of on farm practices and has implemented several trials of pasture, fertilisers and land management. He has a thirst for knowledge and has partnered with NSW Industry and Investment staff, Landcare and CMA staff to implement funded projects on farm.

The prestigious Individual Landcarer Award was contested by a number of worthy nominees, with Rex Maddocks from Tenterfield taking out the Runner Up for his commitment to the Border Landcare Organic Group and Tenterfield Community Garden Group. Andrew Baker of Ashford was awarded the Individual Landcarer Award for his contribution to Landcare at many levels, from his activities on his property, with his local Landcare group Myall Creek / Ashford Landcare and as Deputy Chairman of GWYMAC.

Hans Hietbrink, Mayor of Guyra Shire and MC for the Awards congratulated all the nominees, but especially the runners up and winners for their commitment to Landcare and natural resource management and encouraged everyone at the dinner to continue their efforts.