A Late Report on the Spotlighting Night

Gwydir Ark Group, along with a twenty strong group of adults and children, gathered at Bingara’s Lookout on Saturday evening 17th December. Many brought chairs, drinks, food watching the sun set, enjoying friendship and conversation before Alex Dudley prepared us, as the dark dropped down, for what night creatures we might find and the best way to spot them.

“Dull torches are best” explained Alex, to the disappointment of all who had brought powerful torches with a high beam switch. We stayed behind Alex and his dull torch as he scanned the bush and there, suddenly, we were delighted to see orbs of sparkling green diamonds, brilliant in the night light belonging to a tiny spider, lurking beside a rock, such awesome colours and intensity for two tiny eyes. We saw many of these ‘Wolf’ spiders as they are a common ground-dwelling spider and with such highly reflective eyes you could probably spot many out in your back yard. One adventurer told the group they found a Wolf spider in their house, sucking the life out of a Red Back spider.

Alex dived off into the bush and came up with a gecko that we were too slow to see. The children particularly enjoyed this tiny transparent creature, a Native House Gecko, Gehyra dubia, who Alex handled with great care so that the tail would not drop off in fright. He did allow the children to have a very close up inspection and a small rub. “These animals have the same number of bones in their petite feet as we do and the same internal organs as humans” Alex said. We also saw a Prickly Gecko, Heteronotia binoei and one Eastern spiny-tailed Gecko, Strophurus williamsi that is reluctant to drop its tail because they defend themselves by squirting poison from glands along the tail. Each looked quite different. If a predator pounces on a gecko and it gets away but leaves the tail, which is eaten, is that fauna sustainability, do you think?

“When you’re looking for animals you use your ears, what you listen for is the sound of rustling leaves, on the ground, in the trees and in the air”. We tried hard to listen but our ears were not as tuned as Alex because he was the only one to hear the White-striped mastiff bats, Austranomus australis.

Alex then spotted a cricket with exceptionally long antennae like feelers that are carnivorous and will viciously bite humans too. These crickets are often called King Crickets and are a member of the Stenopelmatidae. On the plus side they kill and eat Funnel Web spiders.

Scurrying along, we found a Common Orb Weaver spider that spins a web on evening and consumes it before daylight, providing itself with a protein. Someone said “that spider would be a housekeeper’s delight!” We learned that the circular parts of a spider web are sticky, to catch insects, the straight lines of structure are not. Huge saucer like orbs of brilliant colours belonged to a Huntsman spider, high up in a fork of a tree. Large messy spider webs spun between trees belonged to Golden Orb Weavers of the family Nephilidae.

Last but not least all torches, on high and low beams, focussed on a mother Brushtail possum, Trichosurus vulpecula, with a tiny possum perched on her back. Both were sitting calmly in the fork of a eucalyptus tree looking down on us as we looked adoringly up at them.

Suddenly it was quite late, all adults were bright eyed and bushy tailed wanting to explore further into the bush and into the night but Alex sensibly suggested we call it quits as the children were getting pretty tired.

Join us for more ‘adventures in the dark’ down Whitlow Road Bird Route. Watch this space for more details, posters around town giving details, call or phone our Local Land Services in Bingara for more information and date.

Next spotlighting is Feb 14th on the Whitlow Road Bird Route from 7pm again. 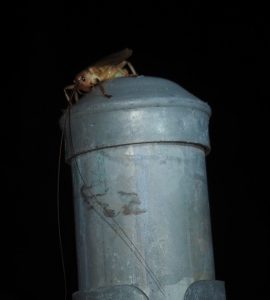 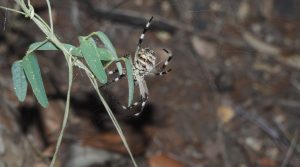 Golden Orb (eats its web in the morning) 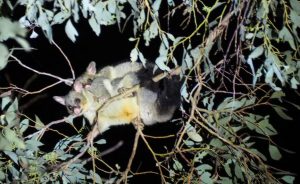