BingaraLatest NewsGeneralRescue Helicopter Service peddles its message across the region

Rescue Helicopter Service peddles its message across the region

A vehicle with the song “Burning Bridges” blaring announced the arrival of 40 Mountain Bike riders and support crew to Bingara on Monday afternoon.  The riders are taking part in Helicopter Rescue Week, from  promoting the work of the Westpac Rescue Helicopter Service.

The riders and their support crew stayed on Monday and Tuesday nights at the Imperial hotel, the guests of Erik and Noelene Ozols. 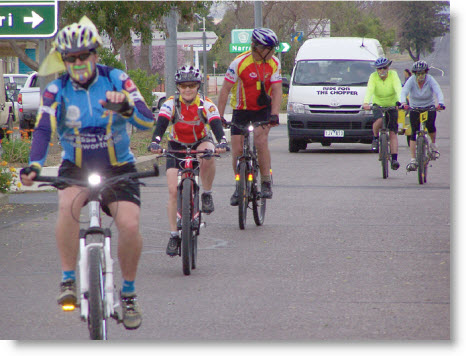 Some of the 40 cyclists taking part in the Westpac Rescue Helicopter  IGA “Ride for the Chopper” arriving in Bingara on Monday afternoon.

“We would to say thank you to the community for the ongoing support the service has received over the last 12 years  and it’s a timely reminder that the service needs to maintain the support  into the future,” Westpac Rescue Helicopter Service Regional coordinator, Barry Walton, said.

The IGA “Ride for the Chopper” an eight day Mountain Bike ride started in Wee Waa on Saturday September 15, and  is weaving its way back to Tamworth via Narrabri, Bingara, Barraba, Manilla and finishing back in Tamworth on September 22.

Riders in this years event are from all over NSW and Queensland. 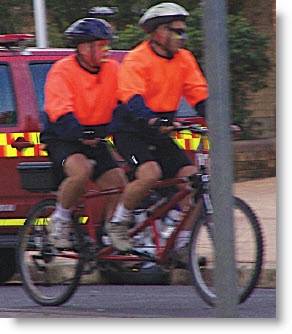 A tandem team from Tamworth Richard Newberry (who is blind) and his mate Graham Davidson are participating for the first time and they  have been keeping up pretty well. (pictured left).

A visit to the Bingara Central School on Tuesday morning resulted in a donation from students and staff, the visit being enjoyed by the hosts and visitors.

Riders were to play bowls at the Bingara Sporting club on Tuesday afternoon,  but rain, or the threat of lightning, stopped play.  However it did give one lucky rider the opportunity to participate in Kyra’s circuit class, much to the amusement of fellow riders who saw it as a great photo opportunity.