Descendants of James Teare Wearne, who moved to Bingara in 1880, enjoyed a proud moment recently when the Portable Boiler (residing at Cunningham Park) was finally reunited with its’ stack. 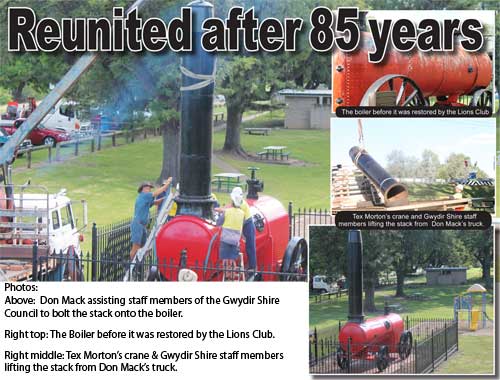 The portable boiler was originally connected to a Small Steam Engine which was built by Marshalls of Gainsborough, Lincolnshire England and was purchased by James Teare Wearne in early 1880s to set up a small flour mill beside his residence on the southern corner of Cunningham and Riddell Streets (CWA Park).

This would be the first flour mill in Bingara, opened in 1883.

This mill was later enlarged and moved to the opposite northern corner of Cunningham and Riddell Streets and called the Victoria Saw and Planing Mill. Here John’s son, Edwin Charles James Wearne learnt the tricks of the trade and became proprietor of the mill. It was here that the Boiler was last used when the mill was closed in the late 1930s.

According to a book by Macy Clifford the boiler enjoyed its’ hey day during an exciting era in Bingara, with five hotels, six stores, a flour mill, a timber mill, a Church of England and a Catholic Church, a cordial factory, numerous small businesses and two blacksmiths.

According to the great grandson of James Teare Wearne, Don Mack, the stack has been lying in an old scrap heap in pieces on the family property of ‘Mitiamo’ situated out the Narrabri Road.

“The stack was in bad condition and when there was talk of the restoration of the boiler we started to get enthusiastic about putting it back together,” said Don. “It is fantastic to see it reunited and all together after all these years.”

It has been quite the joint effort to reunite the boiler and the stack, beginning with the Bingara Lions Club painting and restoring the boiler with the help of the Leo’s Club, Don and Jason Mack putting the stack back together and painting it and Geoff (Tex) Morton and the Gwydir Shire Council helping with the installation of the stack onto the boiler.

An interesting fact about the boiler is that James ran a pipe from the boiler to his house next door to supply bath water for his large family and also had a steam room erected for his workmen at the new timber mill.