North West Theatre Company Film Club has the romantic comedy treat of the year with this Sunday’s film “Roman Holiday” – a famous and much-loved 1953 Hollywood classic filmed entirely in Rome, and introducing Audrey Hepburn to stardom in her very first film role. 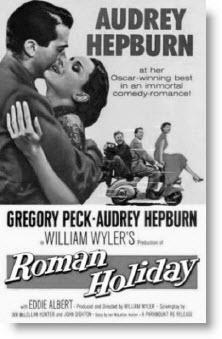 ‘Roman Holiday” tells the story of a young princess on a state visit to Rome who escapes from her minders and embarks on a 24 hour jaunt around the city’s iconic sites with an American reporter in Rome to cover her visit, and his photographer colleague.

There are a number of reasons why this wonderful fantasy made film history.

Firstly is the casting. The role of Princess Ann was originally written for Elizabeth Taylor, but Hepburn, with very little acting experience and no film credits, won the part. That the young actress was to go on and win the Academy Award for Best Actress in her first film role is the stuff of legends.

The role of American reporter Joe Bradley was originally written with Cary Grant in mind, but he declined, believing that he was too old to play Hepburn’s love interest. When Gregory Peck won the part, his contract gave him the only star billing, with Hepburn listed much less prominently in the credits. Halfway through filming, Peck suggested to Director William Wyler that he elevate Hepburn to equal billing – an almost unheard-of gesture of generosity in Hollywood.

“Roman Holiday” was, to put it mildly, an instant hit. In its first year of release, the film earned more than 3 million dollars on North American screens alone – this was 60 years ago. What would that be in todays money terms?

At the 1953 Academy Awards, “Roman Holiday” received no less than 10 nominations, and won 3 for Best Actress (Audrey Hepburn), Best Costume Design (Edith Head – who else?) and Best Writing for a Motion Picture Story (Dalton Trumbo).  And, of course, the other major star of the film is Rome itself.

“Roman Holiday” is in black and white, runs for 118 minutes and is rated G, so is one for all the family. For anyone not ever having seen this classic, or not seeing it for a long time, it is a must.

It also provides a terrific entry-point for anyone considering membership of the Film Club. Seven months remain in the 2013 program, plus a “President’s surprise “ freebie in early December to wrap up the year.

So for only $42, members can see “Roman Holiday”, “The Manchurian Candidate” (original version),” The Sapphires”, “ Man on Wire”, “The Overlanders”, “Storm Boy”, “Warhorse” and “The Intouchables”, plus the December bonus. That is just over $5 per film.

Or just organize it at the Roxy prior to screening. Temporary membership is available for visitors or locals at $10 per film. The films are introduced, and members have a drink and snack after the show.