According to the performers, the café displayed an impressive natural acoustic which augurs well for future performances in the intimate space provided by the café, which quickly took on the feel of a jazz club.

George played the violin and sang in the smooth, laid back style for which he is known. His son, Arthur displayed very impressive skill on the guitar, Stan Valacos played the double bass and Clare O’Meara played the “stomach Steinway”, otherwise known as the piano accordion. As with the very best jazz, there was lots of improvisation after the melody was established. There appeared to be a strong musical empathy between Clare and Arthur which made for some excellent diversions. The sheet music on the floor certainly didn’t receive much attention!

On the occasions that George and Clare sang together, the audience was mesmerised by the combination of tones. Earlier, there had been a pleasant hum of anticipation as George’s players set up their equipment, just a little late, as they had just driven straight from Sydney, dodging kangaroos on the road from Bundarra to Bingara.

George set the tone for the night, opening with a gentle, smooth number by Grapelli.  The group played a number of favourites, as well as some of George’s own compositions.

George, who is Russian born with a surname that sounds like “washing-machine”, has had a vast and varied career in the entertainment business. As a child he trained for seven years as a classical violinist, leaving that behind to form a rhythm and blues band as guitarist, until 1984, when he moved to Sydney and started playing jazz fiddle with The Conway Brothers Hiccup Orchestra.

Since that time George has performed in countless bands and productions as a musician, actor and comedian both on stage and on screen. His son, Arthur is a self taught guitarist, who told the Advocate he became “obsessed” with the guitar when he broke his knee in Year 7.

Clare O’Meara who played with the Bushwhackers, is a professional musician from Sydney, with a career spanning the last two decades. A multi- instrumentalist/song-writer and artist in her own right, her instruments are violin, piano, mandolin, guitar, accordion and vocals.

Double Bass player, Stan whose background is in jazz, afro and reggae, provided the great rhythm that pervaded the evening’s entertainment. The group’s next commitment was at the Newcastle Town Hall at noon on Sunday. 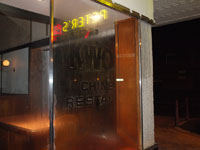 In a collision of past and present, the spirit of the café’s former life as a Chinese restaurant asserted itself through the night with the creepy appearance of the Shun Kwong lettering clearly becoming visible on the fogged front windows of the Roxy café, but only after the telling of a few chinese jokes by George. Click on the thumbnail to view larger image.

Interestingly, on normal occasions there is absolutely no trace of the lettering, you can neither see, nor feel it.