The Roxy Cafe will re-open next Friday, August 8. Geoffrey Robertson has leased the Council owned building. 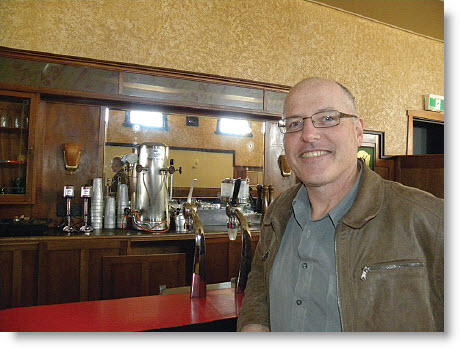 Geoffrey Robertson is looking forward to opening the Roxy Cafe on August 8.

“I remember coming to these Greek style cafes when I was a kid, and I want to bring that back, that idea of going to get an orange crush or a milk shake, and the friendly service,” Geoffrey said.

Geoffrey told the Advocate he is looking to extend the opening hours.

“I have looked at the Council’s plan and their vision, and I think that is a fantastic idea, and certainly education kitchen out the back is certainly a phenomenal opportunity, which I will be looking at as well.”

When Geoffrey attains his Certificate IV in training, he will be able to use the education kitchen for what it was always intended, to train students in hospitality.

“In the meantime, there is no reason why I can’t run adult classes, just for interest. I have a lot of experience in a lot of cuisines, such as Thai, Asian, curries, Moroccan, South American food,” Geoffrey said.

The education area was a key attraction for him.  “It is a very nice cafe, but I have been very interested in getting into education, so this is a bonus.”

Geoffrey has been a chef for over 25 years, and has worked in boutique restaurants, five star hotels, large event catering, including the ANZ stadium where they catered for up to 1000 people at a sitting. He has also worked in aged care, running the Quirindi Retirement Homes kitchen.

In the last 12 months, Geoffrey has worked as an agency chef in Sydney, going to a different place every few days, which he said is really good experience.

Geoffrey was in the team which catered for the opening of the Greek Museum in April.
He will be moving to the town, and renting a house in Bingara.

Geoffrey will be needing staff, and hopes to employ local people.

Born in Narromine, Geoffrey is no stranger to country life, although he has lived in a variety of places. He grew up in the Blue Mountains, worked for some time in Sydney and also overseas.  “I am not a city boy, it was good for my career, gaining experience I can bring here,” he said.

The last few years have been spent in Tamworth.

Geoffrey’s parents at one time owned a property near Warialda, so the area is familiar to him.

As well as lunch and dinner, Geoffrey is considering holding a ‘fine dining’ evening once a month, with degustation menu.

Geoffrey will be sourcing, wherever possible, local produce, such as pork, beef, olive oil, and honey.  And, yes, mixed grill will be on the menu!