The Roxy held a special performance of classical guitar by Dr. Paul Leventhal for the residents of Touriandi Lodge as part of Senior’s Week.

The performance is part of Dr. Leventhal’s commitment to preventing the music of the classical guitar from being forgotten, seeking to prevent the music of an instrument that was, believe it or not, previously not taken seriously.

“Best way to perform is to people who are most amenable to classical music, and who don’t ever get the classical guitar, and that’s residential aged care.  And from there came this idea, to join different people from residential aged care and those in the community, because, unfortunately, the classical guitar is something very rarely heard today – although the guitar is now the most popular instrument in the world.” 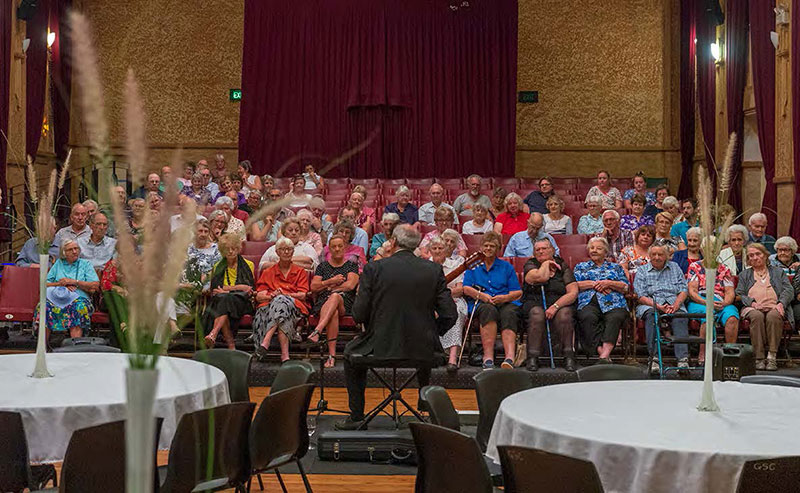 Dr Leventhal claims the Roxy is “the most beautiful venue” he’s ever performed in.

With its low volume, the guitar was suited to more intimate settings, Dr. Leventhal stated, unable to compete with the massed brasses and percussion of the large concert halls and opera houses.
But with some light assistance from his “toys” – a microphone and PA system – his guitar managed to fill the Roxy.

“This is the most beautiful venue I’ve ever played in.  I was sitting here, just playing [before the patrons arrived], because the acoustics are just so incredible.”

Doctor Leventhal played a series of “miniature masterpieces” – pieces for solo guitar written from the three main periods: the classical period of the 1820s-1880s, the romantic period from the 1880s to 1920s, and the modern period.

The theatre’s back seats were nearly filled with patron who came to hear such songs as “Cavatina”, as featured in The Deer Hunter, and older, more obscure classics plucked from the parlours and salons of Europe.

Dr. Leventhal states he is only classical guitarist performing in this sector in NSW, performing four to five times a week all over the state, though he does normally like to keep to within a few hundred kilometres of his home in Sydney.