The Roxy theatre at Bingara could become a ‘Greek Sacred Site’ if George Poulos has his way.  George, a noted Bingaraphile, from the Public Relations Office, Kytherian Association of Australia, is editor of www.kythera-family.net, and is a Trustee of the Kytherian World Heritage Fund. 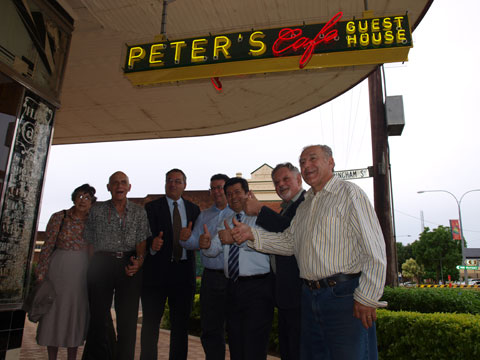 Some of the generous benefactors of the Roxy Complex, with Member for Northern Tablelands, Richard Torbay.

George is one of several Kytherian Australians who have made very generous donations to the restoration of the Roxy complex.

Members of the Greek community in Australia are lining up to befriend the Roxy Theatre, and now the Cafe.

Chairman of the Sydney Roosters Rugby League board, Nick Politis, has personally donated $5,000.

A submission to the Aroney trust has been made, for $25,000 to fund the establishment of a museum in rooms upstairs in the cafe building.  “I hope Greek Australfians will embrace this place as a memorial to achievement,” George Poulos said.

“We were called cafe kids, this will be a memorial to our parents and grandparents,” he said.

Immigrants from Greece, in particular, Kythera began arriving in Australia from about 1880.  They first established fish restaurants and oyster saloons, and gradually spread out, following railway lines to country centres where they started businesses running cafes and cinemas.

While the new immigrants worked hard and did well, they each sent money back home to Kythera.

Recently another Greek cinema, the Saraton at Grafton, reopened after a $4.5M renovation. The theatre is owned by the Notaras family, sons of the original owner who built the theatre in 1926.

The Civic Cinema at Scone, owned by Sydney Opthalmologist, Professor Minas Coroneo, are both excellent examples of Greek threatres in country NSW.

What sets the Roxy apart is that it is the only cinema and cafe complex in New South Wales, possibly Australia, restored to its original usage plan.

“The Roxy could be a pilgrimage point for people around the world,” George said.  Indeed, over 200 Greek Australians are expected to attend the opening of the Roxy Cafe next April.

Friends
A sister city, or town/island relationship between Bingara and the island of Kythera has recently been approved by the Mayor of Kythera.

This friendship will be formalised, probably next year. It is the first relationship established for the Island of Kythera.  The population of Kythera is only 3,500, although this number grows considerably in the summer.  The island covers an area of 282 square kilometres.