Bingara on Monday afternoon with their Roads to Regions program visiting Gwydir Oval. Players, Ruan Sims (NRLW) and Vanessa Foliaki (NRLW), were available to meet and participate in activities as part of the program. 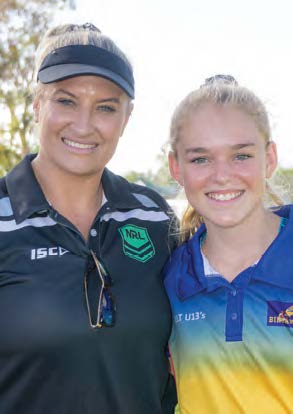 Ruan Sims was a female rugby league footballer who played rugby union for Australia and was a member of the squad at the 2010 Women’s Rugby World Cup that finished in third place. A star of the 2013 and 2017 Women’s Rugby League World Cups, she was part of the squad that won those tournaments.

Vanessa Foliaki is a current Australian Jillaroo and Vanessa has represented New South Wales since 2014, including being part of the first New South Wales team to win the Interstate Challenge in 2016.

“Our main message we are delivering this week is all about respect; treating others the way you would like to be treated. When we think about what it means to us on the field and we are trying to link how what we do on the field we should do off the field,” said Vanessa.

The Roads to Regions tour gives rural fans an opportunity to meet some of the stars of the game. Interactions with players focused on respectful relationships.  “Respect is one of our key pillars and we try to reinforce that with rugby league skills and drills. We have a bit of fun and a laugh,” said Ruan.

Bingara is one of 40 townships across Australia to benefit from the program. Ruan told The Gwydir News “The kids don’t usually get much of an NRL presence. It leaves them with really great memories. Kids carry these memories into adulthood.”

After running the children through their paces in some skill challenges the players and coaches then put them into practice with a few short matches.

“It was so fun. It was pretty cool to meet the girls,” said program participant, Bella Michell. Scarlett Standerwick added “It was great. We got to play a game of footy and meet the footy stars.”

“Many of our players are from rural and regional Australia and still have family in these regions. These areas are the home of grassroots rugby league and we’ll never shy away from the responsibility we have to these areas,” says NRL chief executive, Todd Greenberg.

NRL Head of Government and Community Relations, Jaymes Boland-Rudder, says “Roads to Regions is one of our most successful initiatives.  “It gives communities who seldom get to see the game’s biggest stars an opportunity to meet them in the flesh. After what has happened in recent months, this program is more important now than ever.”

The National Rugby League and its Clubs have partnered with The Salvation Army to continue to raise funds for Australians who have faced extreme weather conditions and natural disasters in recent times, including drought. For further information about the Rural Assistance Appeal see salvationarmy.org.au/nrl. 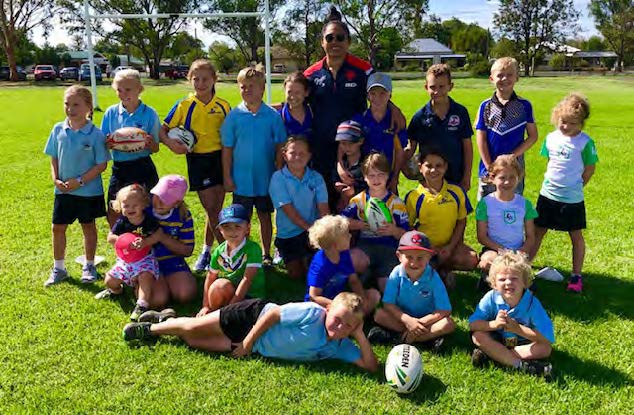