Commissioner Fitzsimmons said being the recipient of a Long Service Medal demonstrates a person’s loyalty to their community and commitment to helping others. “Every member being recognised here today is not afraid of hard work and has shown a willingness to go the extra mile for their brigade,” he said.

"Together, the 19 men and women being awarded today have amassed more than 500 years of service between them. They are all outstanding members of their local communities and are worthy of our sincere gratitude.

“These volunteers all pose a diverse range of skills that enable them to fight bush, grass and house fires as well as attend road accidents and assist during storms and floods.

"I would particularly like to pay tribute to Rodney Honour who has been a member of the Stonefield brigade for more than 50 years, serving as Deputy Captain for more than 10 years.

“Geoffrey Schreck also deserves our thanks for more than 45 years of dedicated service with the Gragin brigade. He is a well respected and knowledgeable member of the brigade and a deserving recipient of a Long Service Medal.”

Commissioner Fitzsimmons also congratulated the Warialda, Bingara, Coolatai and Diamond Swamp brigades on the acquisition of their new trucks. "These four tankers have a combined worth of almost one million dollars but for these brigades they are simply a necessary tool that enable them to do what they do best – protect their communities from fire.

“These new tankers are replacing the older style models currently in service and will help our members continue their outstanding work,” Commissioner Fitzsimmons said.

Commissioner Fitzsimmons concluded by saying the NSW RFS is committed to ensuring that volunteers have all of the necessary equipment required in order to carry out their valuable work.

There was a total of 20 recipients being presented with 19 medals with a total of 552 years of service. With a record of 51 years of service on the Fire Brigade, Rodney Honour was very deserving of his long service award. Rodney joined the Stonefield Brigade in 1960 and in 1999 gained the position of Deputy Captain. Rodney is well respected with the Stonefield Brigade.

Geoffery Schreck and Lionel Johnson of the Gragin Brigade were recognised for almost half a century worth of service, Geoffery has served for 48 years while Lionel has served for 47. In 1980 Lionel became Captain of the Brigade and still holds this position while Geoffery has held several different positions in the Brigade including Senior Deputy Captain and Deputy Group Captain. Both men are well known and respected members of their Brigade.

John Wilson, Kevin Sutton, Michael Farrel, and Terry Roberts were all recognised for over 30 years of service. John and Michael are both members of the North Star Village Brigade while Terry is a long serving member of the Gragin brigade. Tim Nicolle of the Stonefield Brigade, Maxwell Mitchell of the North Star Village Brigade and Sidney Onus of the Stonefield Brigade were all recognised for 29 years of service.

Allina Ropero of the Warialda Brigade was recognised for 20 years of service while Hugh Coulton and David Farrell of the Stonefield Brigade have served for 18 years. 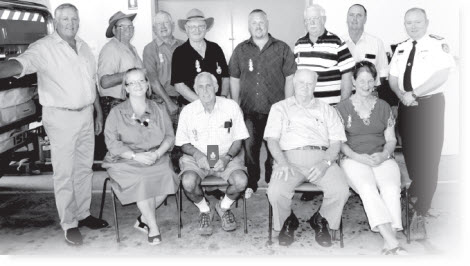 All recipients of the awards were very deserving and are highly respected members of their brigades and communities.