Following is an article written by Toni Robinson from Warialda, published on the Permaculture College Australia blog, described by Rick Hutton, President of Vision 2020 as ‘inspirational’.

Just when I thought there was no hope for rural Australian communities, I’ve discovered a beacon of hope in a place least expected! After observing my small country home town in inland northern NSW disintegrate into a shell with giant empty brown-lawned backyards, uneventful community gathering schedules meaningless broad-acre monoculture and with food and services shipped in and out on a never-ending cycle, there didn’t seem to be any chance of change. A shimmer of hope has pulled itself out of the dust and is proving to be a beacon for this bioregion, setting an example. And if it can be done in this tiny country town, it can in every tiny country town in Australia. 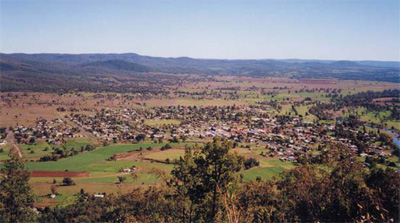 The project goes under the theme of ‘Regeneration’. Member of the steering committee for the project and President of Bingara and District VISION 2020, Rick Hutton, explained how his members felt that ‘Sustainability’ is no longer enough. County towns like Bingara and Warialda in the Gwydir Shire, Northern Tablelands NSW, both with populations of approx 1300 can easily continue to ‘sustain’ the same levels of population, industry and infrastructure, but as farmers and townspeople grow older with no dynamic generational change keen to replace them, there is no sign of growth.. or hope. In these times of environmental crisis, we need to bring people back to the land and to small communities, and move towards keeping food, energy and the whole living system, secure, non resource demanding and LOCAL.

Rick, along with a board of five passionate members have, through market research and working with the community, developed a project which aims to show farmers, townspeople, students and tourists alike, examples of how to farm sustainably, from broad-acre solutions to kitchen gardens. It will showcase farming methods and techniques from all around the globe giving farmers an alternative solution to chemicals, pesticides and Genetically Modified (GM) crops. Experimenting or leaving land fallow while they convert to organic or different systems of agriculture is not an option for farmers in the current high consumer lifestyles and heavy debt situations. This is one reason why this project is revolutionary. It will work with them and can be used as an experimental area for farmers, to encourage alternative and regenerative systems, engage their input and show them how easy it can be to change for a productive future.

But there’s so much more to it than that. The Australian Centre for Regenerative Agriculture (ACRA) will bring about one of the the biggest growth spurts the town has ever seen, ensuring community economic survival by completely sustainable means. Rick describes their aim as to ‘capture this functioning system as a model to roll out to communities in similar situations’.

It all came out the amalgamation of Shire Councils in 2006, when the community watched as other rural Australian towns were swallowed up and forgotten about, and didn’t want the same to happen to them. The community formed Bingara and District VISION 2020 and developed a vision strategy, REGENERATION, with a goal of dynamic sustainability by 2020.

They joined with another leading Council initiative, the first of its kind for rural Australian Councils, the Gwydir Learning Region (GLR). Rod Smith, GLR Training and Development Officer for Gwydir Shire Council, explains it as an amalgamation of local schools and educational institutes (TAFE, University of New England, Community Colleges), with local government.

He has helped pave the way to enrich the community by receiving funding for ventures. Some of the completed projects include; Warialda Gym, creating jobs and also a centre for Physical Education training, and Bingara’s Roxy Theatre, refurbishing the run-down, unused theatre for a cafe, information centre, historical centre, conference rooms and now a commercial kitchen as a training facility. An abnormal amount of research and red-tape cutting had to be done to get the council on board as this type of venture had never been done before though will be the instigator to creating a sustainable and healthy community.

For the development of the 20/20 Vision Strategy, Rick and his team identified the three major assets of Bingara: people, infrastructure and environment and four “growth pillars”, agriculture, tourism, regional conferencing and education.

Then, from the regional issues identified, they developed the following priorities:

The ACRA and its Living Classroom project addressed and resolved each of these issues while providing the catalyst for profound change. It provides the glue to integrate the four dimensional strategy for future growth and the major local productive industries.

What is ACRA exactly?

At this moment, Australian Centre of Regenerative Agriculture is a 150ha piece of degraded common land, within walking distance of the centre of town. It has remnants of contoured swales and a small dry dam, but also much erosion, invasive species and poor soil. The Vision is to turn this into the following:

This will be done in many ways such as capturing all water and run-off and maximising it to its full potential in using techniques such as swales, key and secondary dams, water wheels/hydro systems, chinampas1, and natural irrigation systems. Highly productive integrated crop and livestock systems will be trialled using traditional rare breeds and species, encouraging diversity and prosperity.

There will be three main structures providing a centre of the Farm Gardens. A Bunkhouse for accommodation, a Classroom for all types of education uses, and an Interpretive Centre, the largest of the three, which will encompass an audio/visual display area, restaurant using food produced on site and locally while it ‘gives an introduction to the wonders outside, and records and showcases the results of experimentation in an interactive way’ (Vision Statement).

The community as a whole will benefit:

‘The local community will utilize “ACRA and Living Classroom” to become a “closed loop” community – self sufficient in food and recycling all compostable waste (including treated sewage) back to the site…It will directly employ some 20 people, providing the catalyst for a whole range of other activities in the Shire and indirectly employ many more. It offers an opportunity for all generations to “get their hands dirty” and to “reconnect with the soil”. (Vision Statement).

Funding has already been allocated and must be spent by the end of the year, so at the time of my visit, mid July, the buildings had been marked out and were in the process of organising materials and labour. More funding applications are being processed, and although there is some resistance, typical of rural towns, the general community wholeheartedly support this project, which will ensure growth, food and job security.

This project is an inspiration. A wonderful, encouraging example and a magnet for regional, national and international visitors. It ‘..demonstrates the power of Partnerships – between the local and experiential communities, the full range of educational institutions, industry and all levels of government.’ (ACRA Vision Documents).

What an achievement! We have to thank the community’s vision and strength to push past bureaucracy and accomplish such powerful methods of regeneration and sustainability. And what’s more exciting is that it’s coming to a town near you!

Footnote 1.  A chinampa is a system of Mexico and Thailand used in water systems. Silt build up in the dam/pond is bucketed to the centre to form central islands used for growing crops so it consists almost entirely of edge, making it extremely productive (Introduction to Permaculture, Bill Mollison)

About Toni Robinson:
Certificate 4 student at Permaculture College Australia, Nimbin. As part of her studies she is to undertake a Bioregional Analysis to asses the current situation to recommend approaches toward sustainability. Her home town is Warialda, and intends to implement change and spread the word to move toward a sustainable future in the coming years.