One hundred and fifty men and 25 women started from Bingara on Thursday, the Second day of the Santos North West tour, to take the 105km ride to Narrabri.

Some local people, including the primary students from Bingara Central School were on hand to see the cyclists leave Frazer Street. They were farewelled by Dimity McMurtrie who made a speech and invited the cyclists to “roll out”. 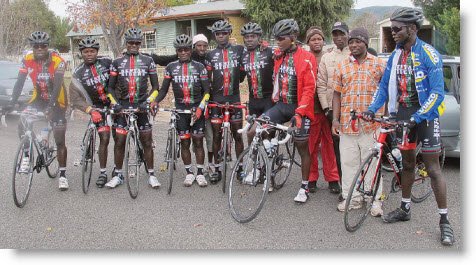 The Kenyan team ready to take the 105 km trip to Narrabri.

“The finishing straight had a headwind the whole way and the last 800 metres felt like forever,” said Bayly who hit the line solo. “It feels great to have my first NRS win and to put on my first tour leader’s jersey.”

In the race from Bingara to Narrabri, the two major king of the mountain sections split the field but the ensuing descents and long sections of flat plains meant no one would get away easily.

It wasn’t until the final 20-kilometres that Bayly made his winning move, taking Racing Kangaroos aggressor Craig Evers with him.

The two worked well together, quickly gaining a one-minute advantage on the peloton that tried in vain to reel them back in the dying moments.

“I’ve been close to victory a few times before with late solo moves like this (but) each time I’ve been caught really close to the line,” Bayly said.

“Once I saw at the 5km to go mark and we still had a decent gap on the bunch I thought I could give it everything and hold them off.”

In the women’s race, it was Tanya Matthewson (Bicycle Super Store) who claimed a solo victory and first up Subaru NRS win of her own ensuring Corset remained in the tour lead.

Mathewson, 37, broke away from the field with 15-kilometres to race, holding on to take the win over a minute ahead of the chasing field.

“I’m elated,” Matthewson exclaimed. “This is my best result ever so I’m really happy and excited for the team.

“I thought they’d catch me quite quickly but when I looked around there was a massive gap so I put my head down and went for it.”

The undulating course from Bingara to Narrabri included two large Queen of the Mountain stages which split the field early and enabled Lisa Keeling (BSS), Rebecca Heath (Holden Cycling) to break away.

After the only major descent of the day the pair were reeled in by a chasing group led by Corset before Matthewson caught the bunch napping, taking her chance at line honours.

Corset retains her lead but sits on equal time to teammate Katrin Garfoot with the pair 11-seconds in front of Felicity Wardlaw.

“I wasn’t sure at the end there if I still had the leader’s jersey but Jenelle (Crooks) and Kat (Garfoot) did such a great job helping me and I can’t wait for tomorrow,” Corset said of Friday’s decisive stage.

The tour concluded on Saturday.

Organisers of the event were somewhat surprised at the size of Bingara, and have been invited by Council’s Economic Development Project Officer, Georgia Standerwick, to consider using Bingara as the base for the next Santos Tour.