Six members of the Bingara Oztag Association, with players from Bingara and Warialda were selected to represent Northern NSW at the Oztag Australian championships at Coffs Harbour last weekend. 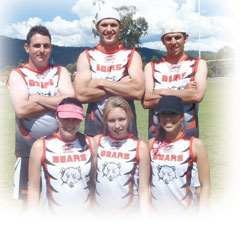 All six players have been travelling to Tamworth for weekly training sessions to meet and practice with their team mates and coach.

Players competed against teams from all over Australia as well as a New Zealand team.

Games commenced on Friday afternoon for both teams at the Coffs Harbour International playing grounds and over the two days the Open Men’s played four games and the Open women’s played six.

The successful teams were to play in the finals on Sunday.

Oztag is a non contact sport which is a modified version of Rugby league with eight players on the field where tags are used to replace tackles.

Trials for the team were held in Tamworth on the last two weekends of August.
Tamworth Oztag representatives also travelled to Bingara for the Oztag sign on day where the coaches spoke to and selected other possible players for the teams.

This was then used as a training run for all players and allowed the Bingara Oztag competitors to get a feel for representative level.

The six players under the Bingara Oztag Association will be running a 100 club to raise money to assist them with the costs involved in playing in this Northern NSW representative side.

These costs include travel, nomination fees, uniforms and accommodation.
“Your support is greatly appreciated and results of the championships will be in the paper the following week,” player, Alex Stones, said.

“Thank you to the Bingara Oztag Committee and Pam Potts at Tamworth Oztag for providing us with this opportunity and for your support and assistance.
“Wish us luck!”