Although not placed in the final three of The Land Sydney Royal Showgirl Competition 2010, Finalist and Bingara Showgirl, Alexandra Stones has returned from the Sydney Show “Confident, empowered and ready to go.” 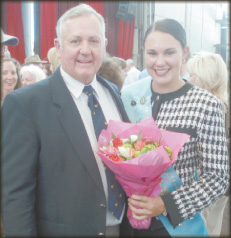 Alex began what she described as “the best week of my life” travelling to Sydney on the Monday before Easter.  She and the other 14 finalists took part in a full week of engagements before the judging on Friday, and the presentations on Saturday afternoon.

Alex was accompanied by her mother and step-father, Angela and Geoff Pankhurst, as well as her father and his partner, and her brother Ethan.  Show Society President, Kelly Holland, and Catherine Egan who has helped organise the competition, and Kelly’s husband, Peter Egan, travelled to Sydney for the presentations. Gwydir Shire Mayor John Coulton and his wife, Kerry kept a close eye on proceedings and also attended the presentations.

Alex said on of the highlights of the week was a visit to Westmead Children’s Hospital where the 15 finalists gave showbags to the children.  “I found the experience very confronting, yet rewarding,” she said.

After the judging, each of the contestants were driven around the main arena in a Ford Mustang.  Alex got to ride in a red 1966 model, which she described as “very cool”.

They also took part in the grand parade, this time in two horse drawn vehicles.
Alex said the first vehicle was a proper carriage, but the other one,which took more of the contestants, was more of a cart than a carriage, in which the girls stood.  “It was interesting having to step up into the cart in dresses, but it was fun,” she said.

A lasting legacy of Alex’s Showgirl journey is the number of friends she has made.  “All the finalists will keep in touch, they were an amazing, incredible, lot of girls from all over the state, and we all got along well,” she said.

Judges of the finals were Member for Parkes, Mark Coulton, Mrs. Fran Macpherson, (mother of Elle and Mimi), and Miss Jillian Kilby.

Mrs. Macpherson commented to Alex she thought she was one of the best dressed.

At a function at Government House, Alex was speaking to representatives from the Alpacca industry. They told her if she ever wants to model alpacca fashions, to give them a call.

Alex said that being a Showgirl finalist presented a great networking opportunity.