Bingara Showgirl, Alexandra Stones, and Quirindi Showgirl, Keiren Jacobs, will represent Zone 4 in ‘The Land’ Sydney Royal Showgirl Competition 2010.  Alex and Keiren were chosen from a field of 15 entrants from around the zone. 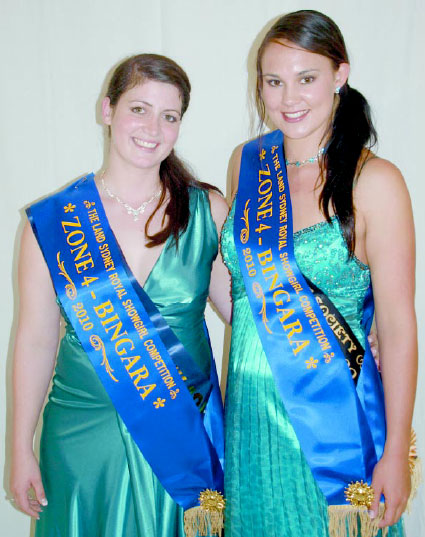 The judging consisted of interviews throughout the day on Saturday, as well as an on-stage interview in front of the crowd of 200 at the Roxy on Saturday night.  For soon-to-retire David Moor, President of the Agricultural Societies Council of NSW, announcing the State finalists was one of his last official functions.

Master of Ceremonies for the evening, Rick Hutton, interviewed each of the contestants, and made each one feel very much at ease.

An impressive team of volunteers acted as waiters and bar staff ensuring the smooth running of the evening.

Judging of the finalists will take place in Sydney, over four days leading up to the announcement on April 10.

The State Finals will see between 15 and 18 young ladies from throughout the state taking part.

Since the Showgirls were re-introduced in Bingara four years ago, it is the second year Bingara has had a Showgirl to go to Zone judging.

The competition is run by Show Society President, Kelly Holland and Annie Harvy-Nicolle, who, with a team of helpers, have also organised Showgirl Balls which have proved very popular.