A recent North West Theatre Company Executive meeting was the recipient of a comprehensive planning document presented to the company by Patron and Life Member Ros Moulton. 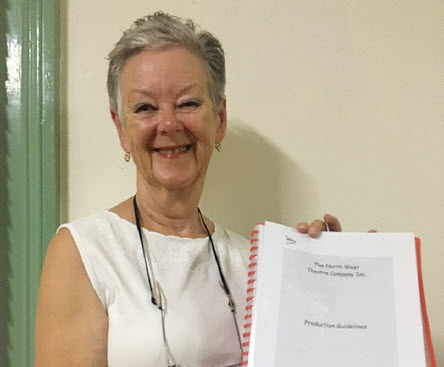 Ros, Secretary of NWTC from its inception until stepping down from the position last year, developed the 42 page Production Guidelines Manual to enable the company to have a working document to cover every aspect of “putting on a show”. Nobody could be in a better position than Ros to call on her 14 years of practical experience to produce such a document.

The Production Guidelines include sections on the roles of the Executive, Director, Producer, Stage Manager and Front of House Manager, as well as production meetings, working with children, tech and set building guidelines, social media, mobile phone and camera policies, stage management, front of house procedures, and, probably most importantly of all, a very comprehensive risk management and assessment policy.

NWTC President John Wearne praised Ros, and the document. “All the experience Ros and other members have had across the many productions staged over the past 14 years have been captured in this manual. These guidelines would be highly valued by any theatre company anywhere, big or small. They can now easily be applied to all future productions as a matter of course”, he added.

Director Rick Hutton has adapted the script from several theatre and film productions, and it will be a very snappy interpretation of the famous John Buchan book with a strong dash of the Alfred Hitchcock treatment. The play has everything……. murder, espionage and a manhunt across the moors of Scotland – all laced with fast scene changes, racy dialogue and considerable humour.

For Technical Director Martin Hansford, it will be his biggest challenge yet with nonstop lighting and sound effects.

The nine person cast is headed by Inverell actor and singer Peter Caddy in the role of Richard Hannay, with some favourite NWTC faces and also some promising new blood stepping on stage for the first time. Rehearsals are in full swing under the guidance of Director Rick Hutton and Producer Lee Loudon, both of whom are very pleased with progress.

Performances of “the 39 Steps” will be on the last weekend in May and the first weekend in June, with 3 matinee and 2 evening performances. Ticket sales are open now and, with only weeks to opening, its not too early to get the best seats.

An early alert to all Film Club members – due to “The 39 Steps” being performed on the usual last Sunday in May, it has been necessary to reschedule the screening date to Wednesday, 31st May at 6pm. The film is that all-time family favourite “Hugo”, and members will receive plenty of notice of this change of date closer to the time. The Executive also resolved that the next playreading will be held on Sunday, 18th June, at 2pm, with the play to be decided and announced in plenty of time to promote this popular event.