From The Soil Carbon Workshop – ‘C-ing is believing!’

May 18 and 19 saw nearly 70 guests attend the ‘Soil Carbon – the diamond in the rough!’ Workshop held at The Living Classroom (TLC) in Bingara. The Workshop, funded through the Murray-Darling Basin Regional Economic Diversity Program, intended to showcase how soil carbon rebuilds soils, invigorates ecology and increases production and profitability. 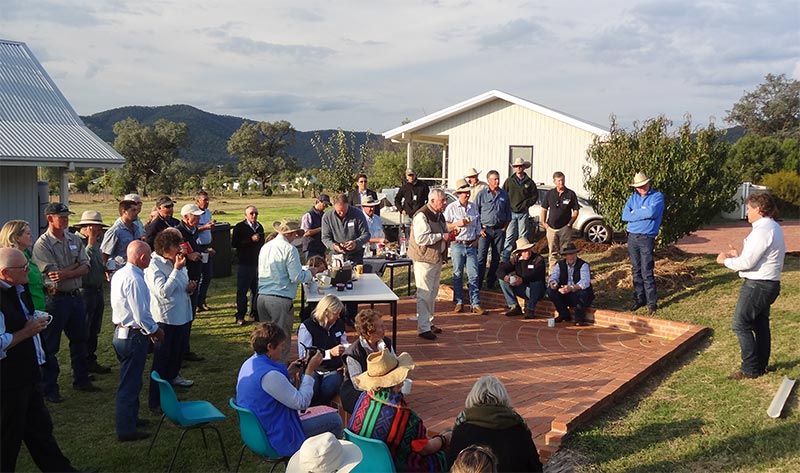 Some of the gathering at The Living Classroom.

In his welcoming address Gwydir Shire Mayor, John Coulton said, “You need to make sure that what you are doing is profitable!” By the end of the two days the delegates seemed to agree that not only was John right, but that the focus on soil carbon will lead to additional ‘profitability’ in environmental regeneration, social enhancement as well as ‘in the bank’.

Chairman of The Carbon Farm (TCF) Board, Garry McDouall, spoke of the journey thus far at TLC and the establishment of The Carbon Farm. He noted that whereas TLC is Council owned and community supported, The Carbon Farm is a community project supported by Council. Garry explained how both projects have been driven by vision for a dynamic and healthy community where the ‘ecological and environmental “wonderland” of the two become, “ … a showcase for the future of agriculture and for city and country living”.

Former Australian Governor General, Major General Michael Jeffrey spoke on ‘The Imperatives for changing agriculture’. He said, “I am worried for the future of my grandchildren.  That is why I have taken the role of the Soil Advocate with ‘Soils for Life’”. He has been in this position through four Prime Ministers and his wise words set the tone for the event.

‘GJ’was followed by his Chief of Staff at ‘Soils for Life’, Natalie Williams, the first of three Nuffield Scholars to present at the Workshop. Natalie’s message had an international flavour. She has travelled widely during her research and she gave examples of too many places on our planet where soil degradation was the norm.

Dr Terry McCosker presented a session on both days. His first was titled “What is soil carbon and why is it valuable?” He explained that increasing soil carbon not only results in more production but it enhances water retention, reduces the need for artificial nutrients, and both reduces costs and increases income. In his second session, Terry spoke on “What is possible with soil carbon sequestration, and where are we up to?” His presentation included trials where considerable increases in soil carbon was achieved, and explained that there is “no upper limit to the amount of soil carbon that can be sequestrated. The soil just keeps building!”

During the breaks in the Workshop there were practical demonstrations of several ‘new’ technologies. Nuffield Scholar, Bryan Granshaw from Soil Information Systems demonstrated their soil carbon baselining system. Jeremy Winer CEO of Weed Technics demonstrated the steam weeder system he has developed. Brooke Sauer from McGregor Gourlay flew a drone and showed the advanced telemetry that is making this machine such a wonderful asset for farmers. Finally, Phil Tickle, from NRM Spatial Hub, demonstrated the latest developments and applications in farm mapping tools.

Simon Mattsson, Nuffield Scholar and award winning cane farmer from Mackay Qld, took on the unenviable task of “Turning Concrete into Soil”. Simon told of his journey to challenge the traditions of the sugar cane industry and his successes in dramatically reducing the dependence on chemicals and fertilizers, and introducing ‘inter-row’ plant species with sugar cane.

The evening gathering around the campfire was entertained and inspired by the reading of prose written and passionately delivered by Adam Blakester of Starfish Initiatives. Just a brief except included these words from his piece, ’Down to Earth!’

“What is life? Well may you ask.
I’m not here to answer you so simply though.
That would take the fun out of the mystery of it all wouldn’t it?

What I can say though is that life is both universal and rare.
I have stretched my consciousness to the furthest reaches of this universe,
And yet I’ve only been able to find a footprint in just a few special places.”

On Day Two of the Workshop the focus was on local examples and on workshopping for ideas. Farmer and consultant Geoff Bassett spoke of “Doing things differently!” His journey was one of discovery and application. Over thirty years of working in the field Geoff has developed the ability to identify what is ‘missing’ in a crop by ‘reading the signs in the plants’. He has helped many farmers discover a new direction and a renewed passion for their land and their soils. 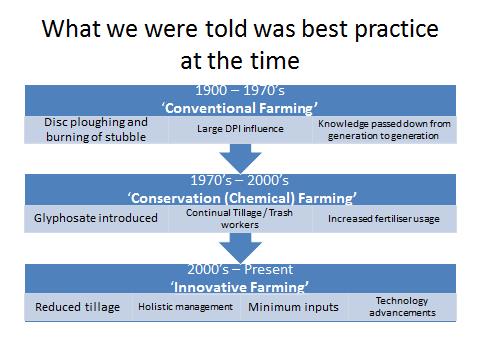 One of the final presentations was delivered by local Bingara farmers, father and son, Don and Jason Mack. They spoke of their multi-generational experiences in the Horton Valley. They told of the ‘changes’ experienced over four generations and provided the slide opposite to explain the three ‘eras’ that they had been through on their farming journey.

A group workshop session accepted the challenge of “Planning for carbon sequestration – The Carbon Farm Case Study”. The five groups then gave a summary of their deliberations.

Finally, farmer and Carbon Farm Board member, Richard Makim summarised the two day workshop and thanked all of the contributors.

Perhaps the final word might appropriately be the following, stated by one of the farmers at the Workshop, “If you want to change the way we farm, show us why, how and when! Seeing, is believing!”. After the Soil Carbon Workshop that may well be also stated as “C-ing is believing!”