Something for everyone at the Bingara Show

It’s almost time for the Bingara Show, and this year, organisers are determined to have something to please everybody.

The Show will run on Saturday and Sunday May 26 and 27 at the Bingara Showground, and will be officially opened by Bingara Show Society Life Member and former resident, Frank King, at 3.00pm on Saturday. The opening will be held on the racetrack in front of the red sails.

Making a comeback after many years is the poultry section. The poultry will be housed under the grandstand, left vacant with the construction of the new bar which is between the main ring and the campdraft arena. Entries received so far indicate the section will be very strong. 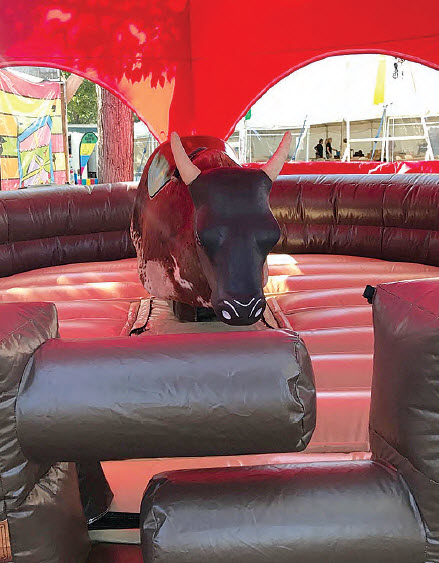 “Unfortunately, the campdraft has had to be postponed due to the continuing dry weather,” Bingara Sow Society President, Russell Smyth, said.
“If we can run one later in the year, we will,” he said.

The ever-popular rodeo will go ahead, starting at 6.30pm.

For those less ambitious than the rodeo competitors, but still wanting to take part in rodeo action, a mechanical bull will operate near the rodeo ring.
“The rodeo went really well last year, and we hope to get the crowd back to support it again,” Russell said.

Entries in the cattle section have been good considering the conditions.  A cattle steward confirmed that late entries can be considered.

Junior paraders and junior judging competitions are in place with plenty of competitors.

Sheep and wool stewards are confident their sections will have good entries.

The pavilion will be very full this year. Apart from the flowers, cooking, art, preserves and a range of crafts, stalls selling quality ladies clothing, interesting jewellery, amazing ladies hats, baby produces, Drizabone products (for when it rains).

Also at the show will be a card reader, showbags, cakes and confectionery and Turkish food.

Sideshows
Show Society Secretary Robyn Phillips said she hopes the show is going to be very well supported with sideshows at the show.  On Tuesday afternoon, a very excited Ms. Phillips announced that dodgem cars would be at the show.

A little before 12.30, the Showground will see an influx of animals taking part in the 2018 Bingara Pet Show. Judging will commence at 12.30pm.
Categories include most colourful pet; Most unusual pet; Smallest pet; Largest pet; Best trick by pet; Owner/pet lookalike; and Golden oldie.
Nominations close on Friday May 25, and entry is by gold coin donation, with the proceeds going to charity.

Horse events will run on both days, with two rings running.

For the duration of the show, John and Mary Jewell, from Australia’s Living History will be providing entertainment and demonstrations. People will learn to make rope, brooms, and even butter at the show.

The Show Society has a toy Kubota tractor and trailer to raffle at the show, which is what all kids want.

As Russell Smyth says – “Forget the dry weather for a day, come and support the Bingara Show.”