The future of small towns is often spoken about, with few solutions offered to reverse the population drift to cities.

Last week, Bingara and District Vision 2020 and the Gwydir Shire Council hosted a two day forum called “Our Place, Country Town Living” to talk about the future and what small communities can do to assure their place in it. Internationally renowned futurist, Dr Peter Ellyard was the first of three speakers for the day session who spoke to the crowd of interested participants at the Roxy about the Country Town of 2025, on Wednesday. He opened his address by saying that he was delighted to be in a place that is looking to its future. 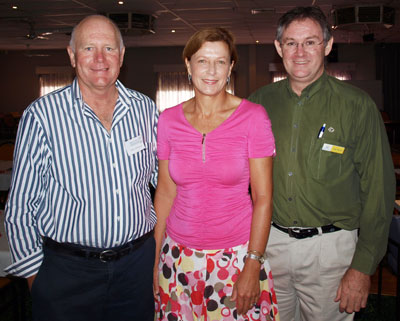 Garry McDouall and Glen Pereira with psychologist,  Margaret Bridgeford before she gave her address on Thursday morning at the RSL

In his speech, Dr Ellyard suggested that Australia is “over managed and underled”. He also said that country towns need to recognise that the development of new things happens in the cities because that is where people are drawn to. “What can we do to change that?” he asked.

With an emphasis on “thrival” not just “survival”, country towns need to encourage leaders who create change rather than just responding to change. The community needs to change from being a “locational community” to an “aspirational” one, he said.

We have to start thinking “together” worldwide. Dr Ellyard used as an example the recent gathering at Copenhagen to talk about Climate Change, where there were still people looking for winners and losers and to apportion blame, rather than working together for the good of the planet. He said that until a group begins to work together it will not progress.

He also suggested that while globalisation is taking place, we are also seeing the rise of “tribalisation” in the world. While trade is increasing and becoming easier, we are seeing countries becoming smaller, predicting that Scotland will be independent within 10 years. “Why take orders from London when the power is in Brussels?” he asked.

Dr Ellyard had some advice for the school students from Warialda and Bingara who were present for his address. He told them to “follow your passion, not your pension because what you study at university will have no bearing on what you will be doing when you are 35!”

In closing, Dr Ellyard said that Einstein said “imagination is more important than knowledge” and that those who don’t live in the future today will live in the past tomorrow.

Other speakers on the day were Agricultural Scientist Dr Maarten Stapper, whose expertise lies in Soil Science and maintaining production through healthy soils and award winning Landscape Architect John Mongard who spoke about planning towns to make them more attractive places to live with an emphasis on eradicating bitumen! 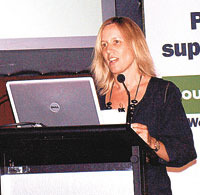 On Wednesday evening, Roxy Manager, Sandy McNaughton told the story of “the Roxy, Past, Present and Future” at the forum dinner at the Roxy.

The psychology of dealing with change was the topic for Margaret Bridgeford, CEO of Resource Consulting Services, who addressed the forum on Thursday morning. She spoke about why people resist change and the processes involved in accepting new ideas. A workshop followed which generated a number of suggestions to make our community a vibrant, attractive place to live.