Jacqueline Coombes was named the 2018 Bingara Sportsperson of the year at Friday Nights Presentation at the Bingara Sporting Club. Jacqueline was not only the winner of the Junior Sport Girl at the 2018 awards but she was also judged the most outstanding athlete of the Year. Jacqueline received the Junior Girl Award from Tony Miller representing the Bingara Tennis Club. 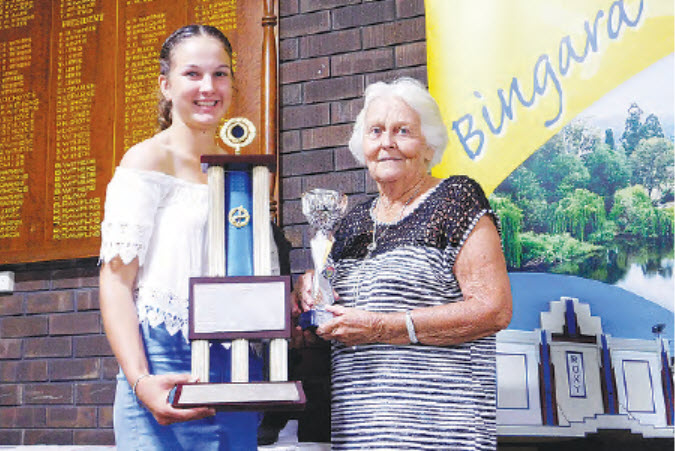 Jacqueline Coombes, Bingara’s Sportsperson of the Year, with Irene Edwards.

Jacqueline achieved so much in 2018 across a variety of sports but especially in horse riding which is her passion. Jacqueline’s persistence and commitment proved to be the difference to the judges who chose this young sporting star as the best of a very talented group of individuals. Jacqueline was well represented on the night with a large contingent of the Coombes family present to witness Jacqueline receive her awards. The Sportsperson of the year Award was presented to Jacqueline by Irene Edwards, representing the Bingara Sporting Club.

This year’s Sporting Team of the Year, which is sponsored by the Gwydir Shire Council, was the most keenly contested award with five worthy nominees presented to the judges for consideration. The Bingara Central Schools Girls Under 16s Touch Football Team were named as the winners of this category and a very excited group of girls were on hand to accept the trophy from the mayor, John Coulton.

Doug Withers, nominated by the Bingara Jockey Club, was awarded the HF Batterham Award by Norman Batterham for outstanding services to sport.

Other section winners were Zoe Allen and Brock Galvin in the SubJunior sections. Both of these budding stars had outstanding years representing their school in athletics and swimming, Zoe also excelled in Physical Culture. Zoe and Brock were presented their awards by Roslyn Andrews and Doreen Oxford who represented the Anderson Family for the Kirk and Colleen Anderson Family Awards. 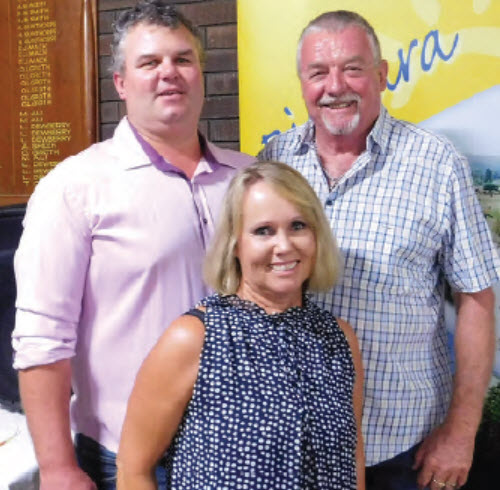 Junior Boy was won by horseman Luka McLachlan for his achievements in polocrosse and at Pony Club and was presented with his award by Stewart Lanagan representing the Bingara Anglers Club.

Senior Sportsperson of the year was won by Dylan Butler and was presented this award by Vanessa Patch and Graham McManus representing the Bingara RSL Club.

This year’s Veteran Sportsperson of the Year Award which was originally donated by H Fay & Sons was won by Mervyn Hall. Susan Hutton was proudly on hand to award this trophy to Mervyn after his outstanding year on the golf course. Mervyn won a number of events in 2018 not only in the veteran category but also in Open Golf tournaments.

This Year’s Sports Awards were again well supported as witnessed by the large crowd present at the Bingara Sporting Club Awards Dinner. Brad McManus was very entertaining as Guest Speaker on the evening, talking about the experiences he has had in his Rugby League Career and encouraging young athletes to “never give up”.  Sporting Club President Gerry Amer was very grateful for Brad to give up his time to return home with his family for the Awards.

Gerry was also pleased with the quality of the nominees and encouraged all those present to continue competing and supporting the vast variety of sports available to the Bingara Community.

This Year’s awards saw nominations from across many sports which is testament to the strength, enthusiasm and tradition that Sporting endeavours hold in the Bingara Community.