What is the connection between the English market town of St Albans, Hertfordshire, situated 20 miles north of London and the small New South Wales town of Bingara? 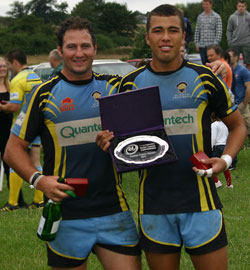 The answer is the “Bingara Boys”, for that is what the supporters of St Albans amateur rugby league club are calling player/coach Shane Rampling and latest Cents signing Matt O’Rourke, who both hail from Bingara.

Shane has been in England for the last six years, originally travelling to the UK for a two year visit. When he found a job with the Rugby Football League as a development officer for the St Albans area, he decided to stay.

Rugby League, originally known as a ‘Northern game’ in England has slowly been spreading its amateur clubs out into the southern heartland of rugby union, and Shane became a player, then player/coach for the St Albans Centurions.

Matt decided to have a ‘year out’ and see a bit of the world before going to university and contacted Shane to see if he could help out with a place to stay, a job and a game of ‘footy’.

According to Centurians committee member, Darryl Brown, the St Albans Centurions have about four or five Aussies playing for them every season, so finding Matt a job and a place to stay was no real problem.

“Being so close to London has also given Matt the opportunity to ‘see the sights’ as well,” Mr. Brown said.

“In the mid season weeks break the team went off to the Spanish beaches together."

“Cents won that encounter, and last weekend the Cents went all the way to win the National Grand Final against Midlands champions Coventry Bears by a staggering score of 56 points to 4,” he said. 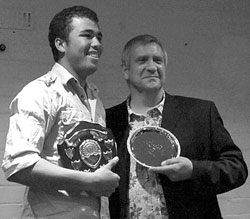 Recognition
At the recent end of season ‘Presentation Evening’ Matt, who will be returning to Australia shortly, won the Young Gun, Supporters Player and Players Player awards for 2010.

Coach Rampling said “We have really enjoyed having Matt over here. He is everything you look for in a great young player, a good club man, keen to learn and afraid of nothing. We hope that we get someone just as good to replace him next season.”

Opportunities
If there are any players in the Bingara area wondering what it would be like playing football with St Albans Centurions next season, which starts in March 2011, have a look at the St Albans Centurions website at www.sacenturions.co.uk or contact Reg Wotlay at reg.wottlay@hotmail.co.uk