“Strings Attached!”, A wonderful concert of magical music is coming to the Roxy.

The North West Theatre Company is delighted to present a wonderful afternoon of beautiful musical masterpieces at the Roxy Theatre. The concert is called “Strings Attached!” and it will take place at the Roxy at 2:00pm on the afternoon of Sunday, September 23rd.

The concert will feature two rising stars of Australian music, Thomas Williams on piano and Robert Manley on cello, piano and recorder.

Thomas Williams originally from Moree, worked as a repetiteur for the Staatstheater Braunschweig in Germany from 2014 until the end of the 2016 Season. Currently, he is living and working in Melbourne and completed his Master of Teaching in June this year. In April 2018 he accompanied Bingara Soprano Alexandra (Lexi) Hutton in the “Back from Berlin” Concert at the Roxy.

Robert Manley studied the cello with Howard Penny at the Australian National Academy of Music and is currently completing a PhD (Performance) at the University of Queensland. Robert has worked with the Tasmanian Symphony Orchestra, Queensland Symphony Orchestra, Melbourne Chamber Orchestra, Auckland Philharmonia Orchestra and Camerata.

The ‘Strings Attached’ Concert at the Roxy on September 23 will feature piano duets by Brahms and Dvorak, Cello / Piano duets by Ravel, Van Goens, Rachmaninoff and Kopetz, and pieces for Recorder and Piano by Vivaldi.

Bookings for ‘Strings Attached’ are open now. The afternoon concert will commence at 2:00pm on September 23. Tickets are $25 for Adults and $20 for Pensioners and School Age Children.

Book now through the Bingara Visitor Information Centre on 6724 0066 or on line and treat yourself and your family to beautiful music that will live forever. 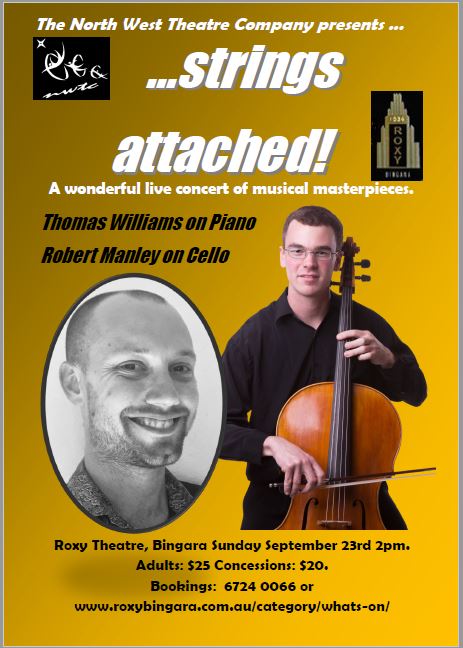