After a rain delayed start, the Bingara Show Campdraft was described by organisers as “very successful.”  Six hundred and fifty runs were completed in a day and a half, finishing by 3.30 on Sunday afternoon. 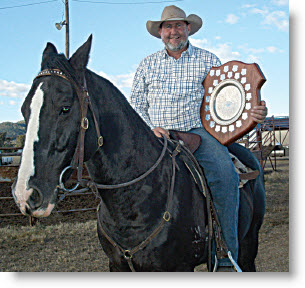 Chief Campdraft Steward, Daryl Burling told the Advocate that the event did not start well, with rain preventing any runs being made on Friday.  Then on Saturday morning, after only a few runs, competitors “revolted”, threatening to go home if the ground was not made safe.  The competitors complained that the ground was dangerous, being too wet and slippery for them to work the cattle safely.

Ron Greenaway, who received an “SOS” from the committee, came to the rescue with his tractor and plough, running over the ground until the competitors were happy.  He also went over the draft ground at the end of day one, making it perfect for the competition to continue on Sunday.

Mr Burling said that he was very grateful to everyone involved in the organisation of the campdraft.  “Helen Nicolle did a wonderful job as committee secretary, as did Greg Johns who was the announcer over the two days. The job he did was excellent,” Mr Burling said.  “This year we had more helpers for the draft, which was greatly appreciated.”

“We were very grateful for the support we received. We can’t run the event without cattle, so it’s wonderful to have so many people prepared to make their animals available to us,” Mr Burling said.

“The committee is also very grateful to Gary O’Neile, Des Allerton Transport and Bill Shutes Transport of Warialda for the job they did in taking the cattle to and from their properties for the event.”