The numbers of returned servicemen and women participating in the Anzac Day march are gradually declining as the years go by, but public support for the Anzac Day ceremony in Bingara continues to be strong.  An excellent crowd lined Maitland Street to watch the march, led by pipers, Don and Andrew Mack. 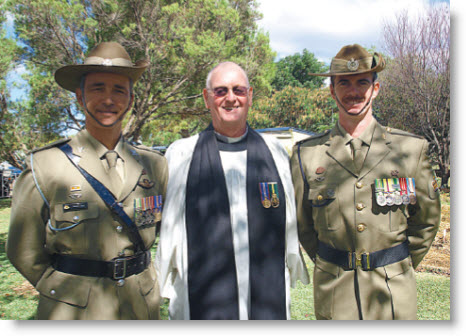 A good number of returned servicemen and women marched, while some rode in golf carts, down Maitland St and around to Memorial Park. An impressive number of Bingara Central School students, many wearing family member’s medals, helped swell the ranks of the parade.

The service at ANZAC Park was held in beautiful sunshine, which was welcome after the chilly start to the day. Major Otter and Warrant Officer, Christopher Jones, who stood with the official party facing the crowd for the morning service, provided a poignant reminder of the young men who have gone to war in years past to fight for Australia.

Major Otter, who addressed the Anzac Day RSL luncheon after the Anzac Day ceremony, generously presented his Australian flag to the Sub-branch at the luncheon. The flag accompanied him on his two deployments to Afghanistan. “It’s been in choppers with me and has been covered in dust, so it’s nice to see it cleaned up,” Major Otter told the Advocate.

Warrant Officer Christopher Jones told the Advocate that he had visited Bingara six years ago, having not long returned from Iraq. On that visit he manned the flags at the Anzac Day ceremony. The purpose of his visit this time was to return the ashes of his grandfather, Bill Bassett, to the place he loved, the Gwydir River. Mr Bassett, who came from Bingara, served in the Pacific in the anti-aircraft division, while his twin brother, Claude was in the Infantry. Another brother, Jack also served in anti-aircraft.

WO Jones said he was pleased to join the Bingara march with his brother Philip and their partners. He also commented that it was great to see the children marching, wearing their family medals, which he thought augured well for the future support of Anzac Day.

Dawn Service
About one hundred people braved the unseasonably cold morning to participate in this year’s Anzac Day Dawn Service in Bingara, which commenced at 6am.

RSL Sub-branch President, David Young told the Advocate that he was very pleased with the attendance.  Mr Young commenced the service with the Prologue which was followed by the hymn “God of our fathers known of old”.

The Reverend Brian Darbyshire gave the Commemoration to the Fallen prayer before the Last Post was played, the haunting notes hanging over the gathering in the morning darkness.

After the minute’s silence, the Ode was delivered by Mark Nay, Senior Vice President of the Sub-branch, the stillness of the morning broken with Reveille.

The final hymn, “O God our help in ages past” was led by Bingara’s indefatigable singers, Patti Steiger and Rick Hutton.

After the end of the service, a good number of people retreated to the RSL Club for a warming breakfast. However, according to those who attended the service, quite a number just dispersed, presumably to somewhere warm.

Visitors to Bingara commented that they were very impressed with the turn out for the Dawn Service.