Students rewarded for a successful 2011

The Bingara Central School presentation night, held on Monday evening saw a large number of children awarded for their academic, sporting and leadership skills demonstrated throughout 2011.

Principal Mark Vale reflected on some of the achievements and highlights made throughout the year, he challenged the audience to think about whether Bingara Central is a high performing school.

In attempting to answer that question he argued that there were four key elements to the school, the infrastructure, the staff, the students and parents and community. “Our school is ‘State of the Art’ and many visitors from other regions marvel at the level of our resourcing,” he said. “A school however is nothing without its teaching and support staff and we are fortunate to have such a great team.”

He went on to comment on what students bring to the school, as well as families and the broader community. “When we see so many parents, family and community members at our functions, carnivals, assemblies, in classrooms, as employers and mentors we have evidence of the strength of the community link. “In answering the question are we a high performing school, my assessment of these four areas confirms for me that we are.

“I am looking forward to 2012 we have, as well as our core work, some notable events to look forward to,” he said. Guest speaker for the night was Professor Stephen Winn from the University of New England who spoke about the potential of future technologies.

President of the P and C, Suzie Bilsborough reflected on the success of the parents and community group over 2011 but stressed that more parents were needed to move the group forward. She also paid tribute to outgoing canteen manager Narelle Watts and thanked her for all her hard work and commitment over the years. 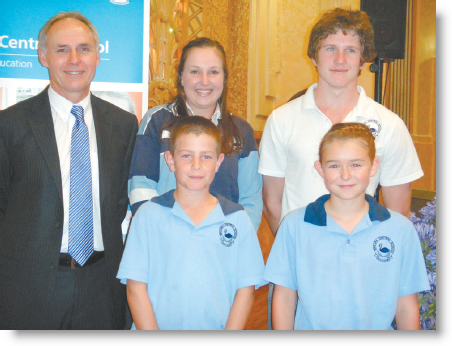 The 2012 SRC and School Captains were announced at the end of the evening. The 2012 Primary School Captain is Emma McDouall with Cameron Hull as Primary Vice-Captain. The Secondary Captain is Nicole Coombes and the vice captain is Daniel Rafter. The 2011 Primary Dux award went to Jake Bilsborough and the Dux of the School based on HSC results from 2010 went to Kristen Heal.

A full list of award recipients will be printed in next week’s Bingara Advocate.