More than 40 children attended the Upper Horton Pony Club Camp during the school holidays, with lots of “littlies” attending. There was a large F Troop this year with nearly 15 children. 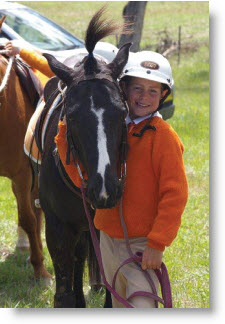 [Click on the image opposite to view photographs of the Upper Horton Pony Club riders.]

Glen Hull was the Chief Instructor, assisted by a number of well credentialed assistants. Most of the older children camped in the hall, with the younger children camping with their families around the ground.

Club Treasurer, Nelp Armstrong reported that “long term stalwart of Upper Horton, Jodie Wilkinson, cooked and did a wonderful job looking after the kids”. Her efforts were greatly assisted by the donation of a new stove by the Gwydir Shire Council and the Community Mutual Group, formerly the New England Credit Union, for which the club was extremely grateful.

After the camp, the club then hosted a very successful zone jamboree over three days. 130 riders, including Associates, participated in the competition, with Upper Horton coming fourth. The Bingara Pony Club won the jamboree by a narrow margin from the Gravesend Club.

Mrs Armstrong told the Advocate that “People came out of the woodwork to help us with the jamboree. Bill Kelly and Shelley Steiger were legendary in mobilising the community to support us. They put an awesome jamboree together, organising lots of helpers. “We had escorts for the kids participating in the cross country, we had helpers to run the jumps and judge the different events.

“It takes a lot of people to run a jamboree. We were grateful to have Ross and Adam Pollock who came across from Gunnedah to lend a hand as well.”

Kylie Fowler,who is a World Cup competitor in jumping, instructed all week at Upper Horton and then stayed for the jamboree, taking on the role of Team Manager for the Upper Horton team. “She was simply wonderful,” Mrs Armstrong said.