The long weekend saw the fourth year of Martin Turner Shield competition. The competition is yellowbelly only and all proceeds of the weekend went to the Cancer Council. It was a well attended even with 57 entries all up.

The biggest yellowbelly for seniors went to Brett Turner from Tamworth (ex Bingara boy). The biggest fish for the juniors was caught by Thomas Burrell of Tamworth. This keen fisherman won the shield after also catching the most fish over the weekend. 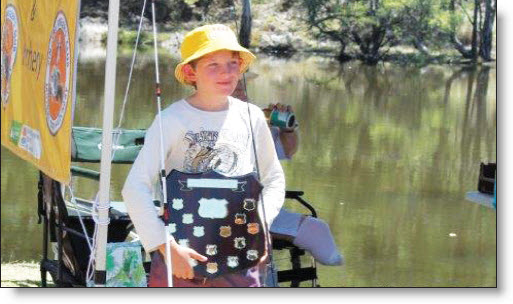 Winner of the Martin Turner Shield was keen fisherman Thomas Burrell who caught the most yellowbelly over the weekend. He also won the award for Biggest Fish caught by a junior.

The river was up which made conditions favorable, 12 yellowbelly weighed in and numerous small cod were caught.

All Yellowbelly are destined for the honeymoon suite at the hatchery. Thank you to all who took part. $665.35 was raised for the weekend.