The community rallied together from as early as 7am to help support Breast and Gynaecological Cancers. All money raised was donated to the NSW Cancer Council. 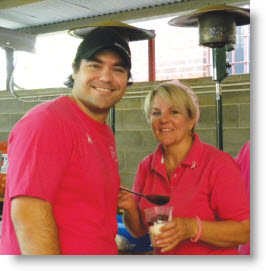 One of the organisers of the event, Tiff Galvin, was extremely pleased with how the morning proceeded. “It is just amazing to see how a little country town is able to come together and support an event like this in such a successful way.

“The Pink Breaky has become a well-known community event and we are very grateful to all those who support it and especially to those who have donated their time and resources to make the day a successful one,” she said. “We are especially grateful to Erik and Noelene Ozols and the staff of Imperial Hotel. Without them the event would never be able to go ahead.”

“A special thanks also goes out to Gail from the Library who hosted a special craft session for children while their parents attended the breakfast.” Tiff went on to thank all community members who were able to donate fresh produce for the event including eggs, spinach, meat, as well as all those who donated their time to help prepare and serve breakfasts. 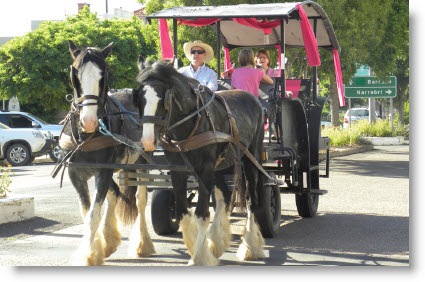 John Wade from Gwydir River Trail Rides decked his horse and cart out in pink in support of the Pink Ribbon event.

A special mention was also made to John Wade who had decked out his horse and cart in pink for the day and took the time to take students to school and many up and down the main street for a joy ride.

“This is just something that would never happen in a bigger town,” Tiff said. Over 176 breakfasts were served on the day and an overall figure for the amount of money raised is yet to be confirmed.

Lindy Cannington representing INTIMO was able to raise $203 from her Intimo stall and raffle while the Cancer Council stall raised approximately $1500 with the merchandise and raffle they ran.

Winner of the Cancer Council raffle was Jodie Cooper. Fiona Rattray was the lucky winner of the INTIMO Hot Pink Men’s Boxers.