“Strings attached!” was the name given to the collaboration between pianist Thomas Williams and cellist Robert Manley in a performance produced by the North West Theatre Company. Beautiful compositions by Brahms, Ravel, Rachmaninoff and Vivaldi were performed wonderfully by the two artists and delighted the audience. 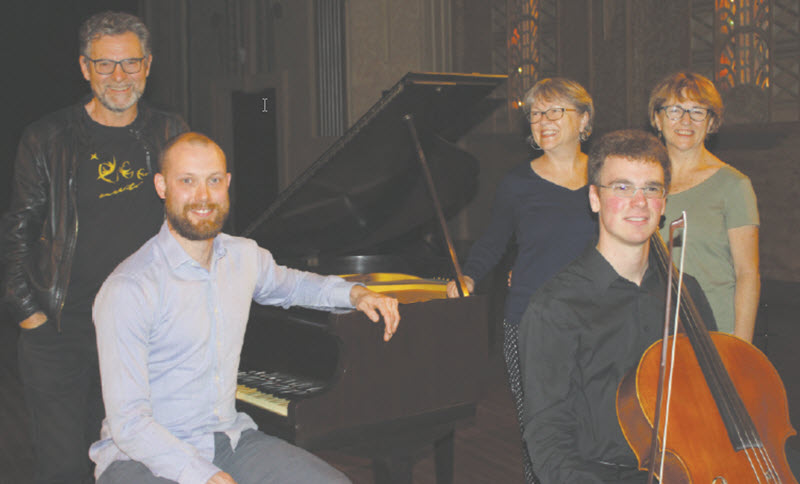 Pianist Thomas Williams and cellist Robert Manley were joined by the nephew of the late Lorna Howell, Rick Hutton and his sisters Debbie Smithers and Cathy Hutton to celebrate the arrival of the Lorna Howell baby grand piano.

Variety was on offer too with Robert providing melodies on the recorder and also joining Thomas with two duel piano pieces. Bequest The piano also offered a rare treat with the introduction of the Lorna Howell baby grand piano to the Roxy.

The late Lorna Howell is the aunt of North West Theatre Company President, Rick Hutton, and great aunt of Bingara soprano Alexandra (Lexi) Hutton. Lorna’s family bequeathed the 100 year old piano to the Roxy and the two performers were delighted by its warm tone and dynamic balance with the cello.

Lorna’s nieces Debbie Smithers and Cathy Hutton made the journey from Sydney to hear the piano make its debut at the Roxy.

At the conclusion of the formal part of the concert Thomas made the unusual gesture of asking the audience if they had any requests. Local identity Ken Holden asked for a Strauss waltz and the duo obliged with an impromptu rendition of the ‘Blue Danube’ on piano and cello.

No doubt a highlight for many in the audience especially the younger members, were the effervescent Czardas played magnificently on the recorder by Robert with vigorous piano accompaniment by Thomas.  “I will never think of my school recorder in the same way again!” said one amazed listener.

The North West Theatre Company will be excited and delighted to have the duo return to the Roxy and to hear more beautiful performances in the majestic theatre on the classic Lorna Howell piano. During the concert, Robert remarked that this was his first visit to Bingara. He told the audience he had searched the streets of many towns, and was delighted to find the Roxy cafe sells bread and butter pudding. That is reason enough to return to the Roxy!