BingaraLatest NewsRuralTalking Turkey: Have you seen an Australian Brush turkey?

Talking Turkey: Have you seen an Australian Brush turkey?

Did you know that the Australian Brush turkey is one of only three mound building birds found in Australia?  The other two are the Mallee fowl and the Shrub fowl.

These three birds rake the ground with strong legs to build large mounds of leaf litter and soil which the female bird lays its eggs in. The heat produced from rotting vegetation, similar to that of a compost heap in your backyard, incubates the eggs. 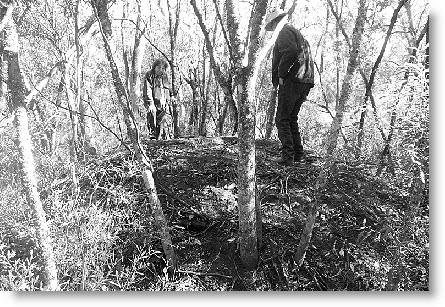 The male Brush turkey turns the material in the mound each day and maintains a constant temperature of around 33 degrees Celsius.  About 49 days later, the chicks hatch, dig out of the mound and run off into the bush with no assistance from their parents.

While the Brush turkey is common on the east coast of Australia from Cape York to south of Sydney, an isolated population  between Warialda and Bingara and west to Narrabri on the North West Slopes and Plains is under considerable pressure from pigs, foxes and cats, loss of habitat from clearing, fireand grazing by goats.

The Border Rivers Gwydir Catchment Management Authority is supporting a preliminary study of Brush turkeys in the area between Warialda and Bingara.

If you have seen a Brush turkey, or have mounds on your property, it would be great to hear from you. If you would like to know more, wildlife cameras could be set up on or nearby mounds to determine how many birds could be in the area and how many feral animals are visiting mounds. The information collected will be used to determine the actual size and distribution of the Brush turkey population in the area and what feral animal control could assist their survival.