Teddy Tahu Rhodes star of Opera in the Paddock

For over a decade the paddock in question has been home to Opera in the Paddock held on the property “Mimosa” at Delungra, situated 25kms from the town of Inverell. 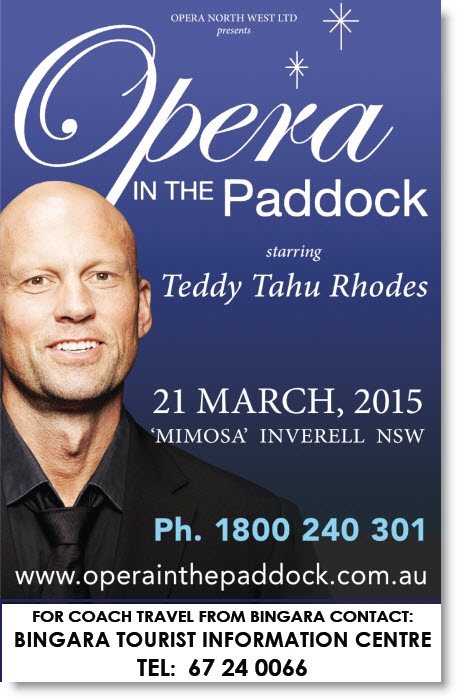 It has been graced by some of the greatest singers performing in Australia and internationally today and is recognized as a major cultural event in the region. Opera North West is delighted to announce that acclaimed opera star Teddy Tahu Rhodes will star in Opera in the Paddock in 2015.

The paddock strips away all pretention as the audience is invited to bring their own chairs, picnics and favourite tipple. Indeed, the ability to experience a world-class performance in such a relaxed atmosphere, on a private property in rural Australia is a rare event. Teddy Tahu Rhodes is an extraordinary talent. His performances captivate audiences around the world, resulting in sell-out events wherever he performs. Teddy will be joined at Opera in the Paddock by Tenor Bradley Daley, mezzo soprano Elizabeth Lewis and soprano Peta Blyth.

The Mimosa Orchestra will enhance the experience, under the direction of the Head of the State Opera of South Australia, conductor Timothy Sexton. Jenny Nickson, Deputy Leader of the Covent Garden Orchestra, London will lead the Orchestra.

Tahu Rhodes rose to prominence in Australia and has performed regularly at the major opera companies in San Francisco, Houston, Dallas, Philadelphia, Washington, D.C., New York, and throughout Europe. Opera in the Paddock will take place Saturday, March 21.