The day the Prime Minister nearly went to Gravesend

Council was ready with the plaque, the Gravesend community was busy baking for morning tea, then on Saturday night, it was announced the Prime Minister, Tony Abbott was departing for Amsterdam in the early hours of Sunday morning, so couldn’t be at Gravesend to open the newly renovated Moffett Park. 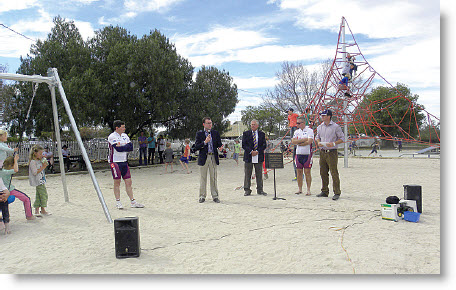 The opening of the park was to coincide with the first leg of the annual Pollie Pedal, which was instigated by Mr. Abbott. This is the first year Mr. Abbott has not ridden in the fund-raiser for Carers Australia.

He attended a function in Moree on Friday night to launch the ride, then left at about 10 pm and flew to Canberra, and flew out at 1am on Sunday morning.

The plaque commemorating the opening was unveiled by Minister for Social Services, the Hon Kevin Andrews, who led the ride.

“The $85,000 project was funded by the NSW Government, Gwydir Shire Council and the local community, including efforts from Gravesend Public School students and Dan and Jody van Velthuizen, who led the volunteer work at the park. It is a wonderful final product,” Mr. Marshall said.