The fully restored Roxy Cafe will be operating and open in two months.

Council has successfully negotiated with Vio Nedianu to open a family restaurant.  Vio, and his wife, Ayesha and five of their children will move form Brisbane and lease the Cafe.

Vio was born in Romania and has made Australia his home since 1988.  Ayesha was born in Jordan; her family moved here when she was just two. 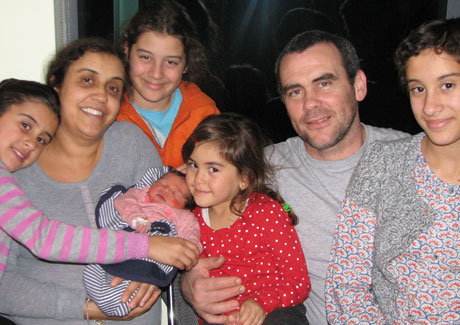 Ayesha and Vio Nedianu, with their children, from left: Ramona, Zacharia, baby Hercules, Latifa and Amira.

Vio and Ayesha have been looking for a country home.  Early in their married life they lived in a small town in Tasmania.  They moved to Brisbane but have always longed to move back to a quieter, more relaxed life in the bush to raise their children.  These plans were a little delayed but after seeing the Roxy Cafe opportunity advertised, a conversation with Council’s Consultant, Albert Stafford, and numerous meetings with Council,they have now committed to make the move to Gwydir.

Vio said, ‘Ayesha and I want to become part of a country community.  We want our youngest children to know a country life away from the rush of the city. The Roxy Cafe is a very special place which the community owns. We want to open the Cafe for for families and friends to enjoy a good quality meal together.’

When asked what type of food will be served Vio said ‘steaks, fish, pasta, salads, authentic italian pizzas. There will be a light lunch menu and an extended evening menu. There will be something for everyone.