You’ve got to give it to the North West Theatre Company, they really know how to put on a show.  The ‘Hitchhiker’s Guide to the Galaxy’, was an evening of light entertainment at the Roxy Theatre on Saturday February 20. 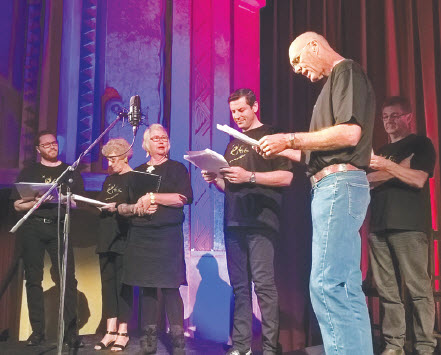 The evening included a forty minute radio play re-enactment, a delicious two course meal and a ‘sneak preview’ of the Company’s May production of Noel Coward’s, ‘Blithe Spirit’.

The Roxy was dressed up with some sparkling table decorations and the sell-out audience of 100 guests, settled in for a fun night.

First as a radio play, then as a TV series and finally as a movie, the story begins with Arthur’s house in Cottington, being demolished to make way for a council bypass.

This is of little importance, as Arthur’s friend, Ford Prefect reveals to Arthur, that he is from a small planet in the vicinity of star Betelgeuse, and that the planet Earth is itself about to be vaporised, to make way for a hyperspace bypass.

Mark Everett as Arthur Dent and Ben Daley as Ford Prefect got the story underway after an introduction by Ros Moulton, who played “The Book”.

Saul Standerwick as Council Staffer Prosser, Linda McDouall as The Barmaid, and Lee Loudon as Councillor Cynthia Fitz-Milton, provided the earthly starters, before the Vogon Captain, Rick Hutton, announced to them all that the Vogon Constructor Fleet was about to eliminate the planet. Ford and Arthur manage to escape Earth just in time and begin their travels about the galaxy as Hitchhikers.

The NWTC reading of Episode 1 of Hitchhikers Guide, was funny, light and airy, and although perhaps a little flat as watchable theatre, it featured wonderful character performances from the ensemble, and the special sound effects masterfully controlled by Director, Martin Hansford, gave good insight, into a golden age of radio plays.

The meal was fresh and tasty with the ‘galactic desserts’, especially prepared by Susan Hutton ‘out of this world’. 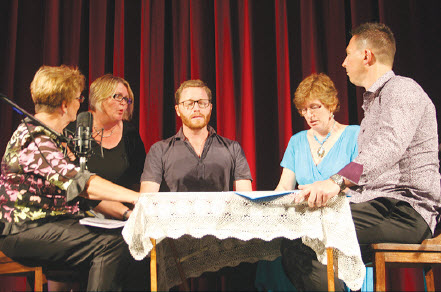 The preview of ‘Blithe Spirit’, was a preview of the Company’s May production performed by six of the cast members. The seance scene, effectively a rehearsal, was a real hoot.

Nedine Young as the clairvoyant Madame Arcati, Ben Daley as Charles Condomine, Tanya Heaton as his wife Ruth, Peter Caddey and Johnette Walker as their friends, Dr and Mrs Bradman, and Grace Smyth as the ghost of Charles’ first wife Elvira, showed that this production will be slick and polished and not to be missed.

The night was compered by NWTC President, John Wearne, who guided the audience through the various elements of the evening with wit and a bit of intra-galactic knowledge.

It looks like 2016 will be a great one for the North West Theatre Company and its supporters.