The only horses at 2013 Bingara Cup meeting

John Wade’s team of three were the only horses at the 2013 Bingara Cup meeting on Saturday, following the cancellation of the races. This is the second consecutive year that rain has put a halt to the once-a-year event in Bingara, but the lack of horses didn’t ruin what turned out to be a great afternoon. 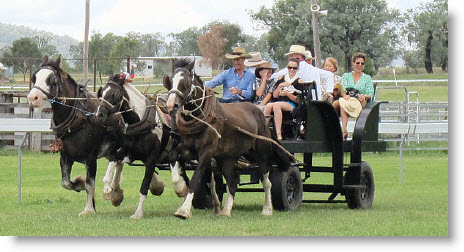 John Wades horses got into the racing mood and put on a burst of speed as they went down the straight at the racecourse, surprising Mr. Wade and his passengers.

Bingara Jockey Club President, Sinclair Munro, was philosophical about the cancellation. “Because of the rain the week before, the ground was already quite wet, and as soon as rain fell on Friday afternoon, it ran from the hill down to the track,” Sinclair said.

“The track was in perfect order until 4 pm on Friday afternoon, probably the best it’s ever been. “However, 20 ml of rain made the track unsafe, and steward Shane Cullen, from Tamworth inspected the track and said we had no chance to race."

"We still had a good day, nearly 400 people were there, we had free entry and had a band playing, fashions were once again outstanding, we had good coverage of metropolitan races, it was a fun day out. The weather was perfect, not hot or cold, just no horses,” Mr. Munro said.

Organiser of the Fashions in the Field competition and Jockey Club committee member, Bronwyn Neate, said she felt like she “had smashed into a brick wall” after receiving the news that the races had been cancelled.

“Luckily after an hour the feeling went away, and Wow, what a brilliant day it turned out to be. “It was sunny with a cool breeze and the grounds mowed and so green, suitable for a wedding! “TAB and a few bookies kept punters happy. The bar had champagne flowing all afternoon – never ran out.

“There was live music and at the end of the day the racegoers were dancing!” Bronwyn said. Visitors from the gold Coast told Bronwyn that “Fashions were better quality than we observed at the Magic Millions”.

Children enjoyed rides with John Wade on his wagon and team of horses, and local children won Young Male and Female Racegoer – in fact brother and sister. Visitors won the three categories for men – Sir Dapper, Mr. Cool and Comfortable and Mr. Trendy.

Unfortunately quite a few guys wouldn’t accept being nominated for their categories (too shy?).

However, the ladies loved dressing up. Two categories, Lady of the Day for the more mature lady and Ms. Racing attracted a large number of entrants.

Best Ladies’ Hat and Best Fascinator enabled a further line up of well-dressed ladies.
The category Ms. Racing had an amazing number of ladies for the judges to work with – 30 finalists were chosen, but 130 tickets would have been given out.

“Congratulations to the effort so many people made in dressing up for the day, and still attending, despite no horses. It was a fabulous afternoon, thank you, thank you,” Bronwyn said.