At Bingara’s recent Australia Day ceremony, five Bingara residents were presented with a special Australia Day award for their service to the Bingara community.

“These people have given countless hours of outstanding devotion and service as members of community organisations, and assisting the more senior or mature residents and as well as commitment to the younger members of the community, not only students at but in the wider community,” Chair of the Special Events Committee, Catherine Egan, said. 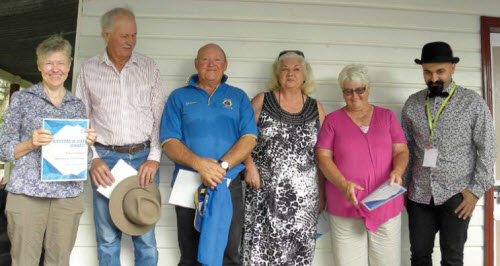 Robyn Gasson, David Young, Graham Gunthorpe, Susanne Hughes and Lorraine Wade (representing her son, John), all were recognised with Service to the Community certificates on Australia Day. With them is with Australia Day Ambassador Joseph Tawadros AM.

Graham Gunthorpe was recognised for contributions to the Community and local Organisations for over 50 years, some of which include:

David Young’s contributions to Bingara and local Organisations for over 40 years, include:

Susanne Hughes’ impressive list of contributions to the organisations in Bingara include:

John Wade can often be seen around town providing rides to people taking part in fund-raising events. His contributions extend to the wider community, Organisations which have benefitted from John’s help include:

Robyn Gasson’s contributions to the well-being of young people in Bingara and people of a mature age in the community was recognised. Her involvement with local organisations includes:

All of the community members, with the exception of John Wade, who was taking vistors on a ride, were present to receive their certificates from Bingara’s Australia Day Ambassador, Joseph Tawadros.