BingaraLatest NewsThe RoxyThe Roxy Cafe through the eyes of a daughter

The Roxy Cafe through the eyes of a daughter

The following story was contributed to the Bingara Advocate by Ellen Holley (nee, Vangis), the daughter of Harry Vangis, who bought the Roxy cafe in 1995. 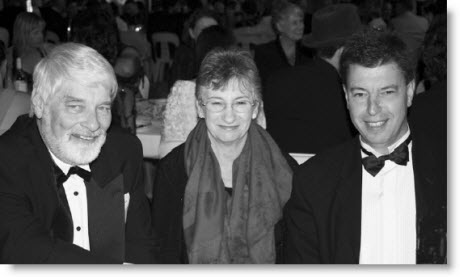 Daughter of Harry Vangis, Ellen Holley pictured with Robert Holley
and her cousin John Andrew at the Roxy Celebrations in April.

"Harry Vangis was my dad, and he owned the cafe called Peters and Co Cafe (Roxy café) at Bingara, as a working café, for approximately 15 years, from 1945.

I believe the earlier years of his ownership were the ‘heyday’ of inland cafes when people on the land would come in to town to have a meal. I remember especially Saturdays, when Dad had three roasts going. I remember roast pork, with either lamb, beef or chicken with roast vegetables and of course the famous Australian Mixed grill of steak, chops, sausages, tomato, eggs and a small salad; ice cream sundaes, milkshakes and cups of tea. Also dad’s famous squashes flavoured pineapple, orange and lemon.

I still have people asking for the recipe for dad’s lemon squash, which was made from fresh ingredients, and they were all nice and cold. I remember milk having slivers of ice which accentuated the creaminess. I don’t remember any chips or greasy food and there was no Greek food, as Australian people wouldn’t have accepted that back then. So I remember people coming into town, especially on Saturdays, shopping, then coming in for lunch, and dad had the radio tuned to the races for the customers, and some going on to our races, when they were on.

Dad would start work at 8am by opening the front doors and hosing the footpath and setting things up for the day, replenishing and ordering stock, serving, cooking, working all day until 8pm and they would clean until about 10.00am. This was six days a week, with very little peripheral work on Sundays, catching up on sleep. My parents were hard workers, both working about 100 hours per week.

Dad married a local girl, Nellie (Neldaleen Alys) Cooper, and they were married in the upstairs room. Mum was his number one girl of responsibility in the cafe and Dad employed a lot of Mum’s relatives as well as other locals. Mum told me that when they were engaged Dad hired a taxi [no public transport] to send her all the way to Newcastle to see a specialist when she had a serious skin condition after her mother suddenly died.

I remember my mother scrubbing the wooden floors, on her hands and knees, of the now conference room weekly. I don’t know if dad was the first Greek to marry a local Australian. I suspect not all of mum’s relatives would have found it easy having mum marry a Greek, but I also suspect not all Greeks dad knew would have found it easy with his marrying out of the Greek tradition.

There probably was a cultural as well as age difference in their marriage. Mum was born in March 1922, so she was 19 years younger than dad.

For me, growing up in the café for the first 11 years of my life, I felt very secure and privileged to live in such a beautiful building.

In 1960 dad sold the cafe to Mr. Jim Loulias, and retired to his ‘farm’. (After seeing his land and olive trees in Greece, I realise why he called one acre of land with a shed, a ‘farm’). He also invested in a couple of houses and a shop.

He was a quiet natured man, very strict, but a ‘peoples person’. He used to tell me a few stories:

1. Of drinking some of the milk from the goat before taking it to his mother.

2. He spoke fondly of Kythera and of diving under the sea and finding a fresh water spring rising from which he could drink whilst in the seawater.

3. Of sleeping on a kitchen table, as a bed, when he first came to Australia.

4. Of applying to a certain bank for a loan and being rejected, then receiving the loan from another bank in town to buy the cafe. Needless to say one bank received bad publicity for 30years and the other good publicity for 30 years.

He always said ‘word of mouth’ was the best publicity. [He had been associated with Elleni and Angelo Christian’s family cafe ‘The Dreamland’ in Tamworth beforehand].

5. Inviting the travelling Health Inspector to stay in the cafe for accommodation, as it was nicer than the pubs, and the man staying for a whole week going through the place with a fine-tooth comb.

Dad knew where everyone had their farm and what was on it. I think he knew more of the locals than mum. He really took Bingara into his heart and would say to visitors – ‘This is the best place on earth’.  I agree.

I love the cafe building, but the greatest heritage I received from him was sitting with him at the end of the day and his saying: ‘We are so blessed; we have this lovely clear sky, sunshine, food in our bellies, a roof over our heads and clothes on our back’.

I thank the Lord for this heritage, and the restoration of the Roxy only enhances my feelings in the most wonderful way. I also want to honour the Greek immigrants, male and female, who overcame many obstacles and difficulties.

For the most part my dad did it with no rancour. I was blessed to have a dad who was respected in the community and to share in the good times of the cafe."

Thank you to all those who had anything to with the restoration of the building.  It was that and more. God bless.