Are you thinking of ‘101 Things to See and Do in Bingara & District’? Then The Living Classroom is offering a growing number of options. After some tough times, things are blooming at TLC!

First the drought, then the bush fires then COVID19. It seems like nature is ganging up on us and testing our resolve. After two and half years of oppressive dry weather much of the land at TLC had turned to dust. 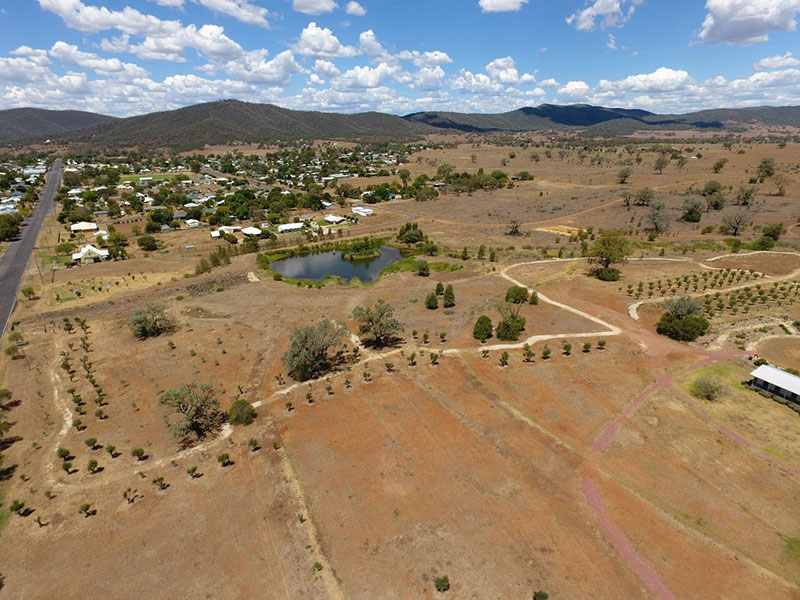 The picture above shows how the earth was baked and bare, with just the ‘Great Lake’ (at the lowest point of the site) still moist and green, and this only because of the extended pipeline from the Bingara Hatchery giving us the option of keeping the lake topped up with river water. The lake is teeming with fish, frogs and birds and is a true oasis.

Compare that scene with the picture below, from the first week in June 2020. (thanks to Scott Crispin for both drone pictures). The ground cover has now returned and many of the trees are thriving. The dust storms that plagued the ‘Pulse of the Earth’ Festival last September are gone, but certainly not forgotten. 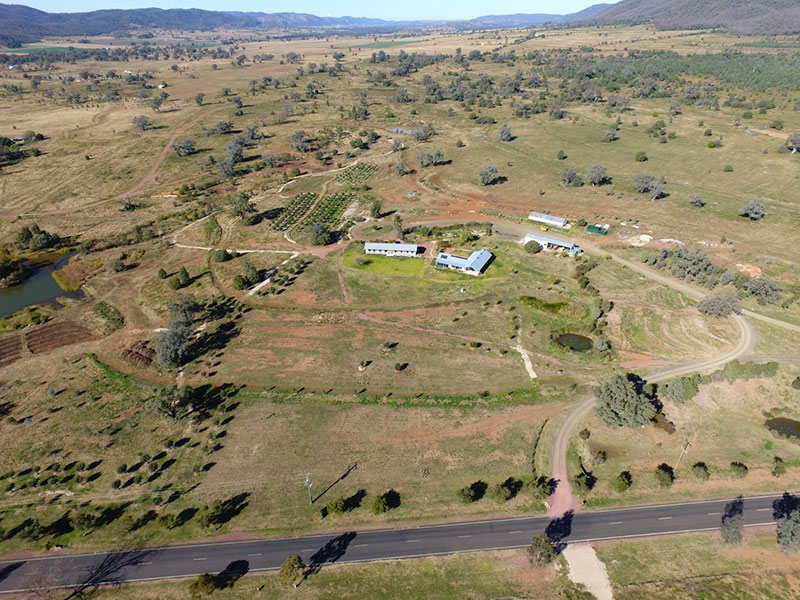 Several new projects have commenced this autumn. The laneway and fencing to the south of the site has been completed with a new gateway at the southern end of Argoon Street. This leads to The Carbon Farm (TCF). TCF is a community project designed to showcase ways and means of enhancing soils and groundcover and increasing the capture of carbon dioxide from the atmosphere to sequester it into the soil as stable carbon. You can read more about it at TheCarbonFarm.com.au website.

Bingara Central School has approached TLC to partner in their Cattle Project. Headed by teacher Charles Mill the plan is to have a set of yards and a barn style shed working base where students will feed and nurture a small herd of cattle for showing at state and regional shows. The Barn will become the centre for a range of livestock activities to be developed at TLC in the next few years.

The Aussie Farm Dam Makeover (AFDM) was a project commenced several years ago in conjunction with Northern Slopes Landcare Association and NW Local Land Services. Using the design work of Queensland University of Technology Landscape Architecture students Debbie Turner and Emily Colling, the AFDM is a design that fits into the water capture and storage at TLC. Two large dams and a series of small leaky weirs between them had been built along the streamline. With five kilometres of banks and swales, nearly all the rainwater that falls on TLC is captured and allowed to seep into the soil to become groundwater. Since its construction no local flooding has occurred on the western side of Bingara. Some of the rubble and earth from the old Bingara War Memorial Pool has been used to create a new ‘leaky dam’ to capture and store even more water in the basin. 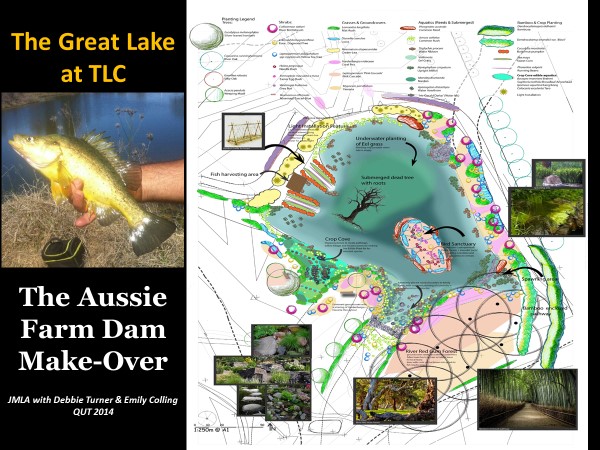 TLC will link in with the Cunningham Park precinct, where the new Bingara Pool is being constructed. The connection will be along a walking pathway called “The Weaving Water Way”. From the new pool the ‘pathway’ will continue out to the Myall Creek Memorial along the Delungra Road and return to Bingara along the Whitlow Road. The total project is called ‘Big River Dreaming’ and forms the tourism attractions funded by a NSW State Government Regional Tourism grant. At TLC two new buildings will provide an Interpretive Centre to showcase the history of TLC and the story of world food. It will become yet another of the ‘101 Things to See and Do in Bingara & District’.

On the north west side of the Great Lake an area of terraced land 60 metres by 20 metres is being shaped into raised garden beds to form the ‘A-Mazing Vegetables’ project. Imagine a series of garden beds designed to help you to ‘get lost’ in an array of vegies, vines and fruit trees. Nearly 800 square metres of garden beds will showcase fresh foods throughout the year in a design to make it a maze-like adventure park. Community volunteers and service groups will be invited to be part of the ‘A-Mazing Vegetables’ project and the locals and visitors will be invited to sample and share the produce.

Lots of things happening and growing at The Living Classroom. TLC is open to the public to visit, take a stroll, and enjoy this wonderful asset in Bingara and The Gwydir Shire. For a conducted tour or more information please contact the Manager, Rick Hutton on 0438 355 197.